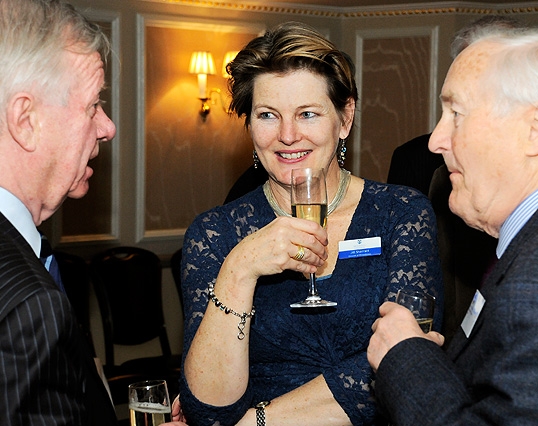 The inaugural drinks for Oxbridge OBs were held on Thursday 18th April at the Oxford & Cambridge Club. Hosted by Old Brightonians President and Hon. Fellow of Pembroke College, Cambridge, Sir John Chilcot (H/S. 1952-57) the drinks were a great success, proving to be a jocular evening with much bating between OB Oxford & Cambridge graduates.

Chris Pett (H. 1962-67) generously welcomed all, and waxed lyrical about the many benefits not only of the OB network but also membership of the Oxford & Cambridge Club, (which did indeed prove a very good venue and the service was immaculate throughout the evening). Sir John Chilcot added his welcome as President of the Old Brightonians, and hoped that this would be the first of many such occasions, also requesting that the OB network review other such university gatherings.

Head Master Richard Cairns, updated the assembled OBs with news from the College, including the stunning new Jubilee Pavilion (down at the renamed New Ground - now the Jubilee Ground), the new boarding house due to open in September, which completes the original quad as conceived by Sir Thomas Jackson, and the plans for a wonderful new Music Department overlooking the Home Ground, right at the heart of the College. Richard noted that despite the ever-growing numbers, and the brilliant academic achievements of pupils at the College that OBs should rest assured that the College had not become a 'hot house'. Brighton College pupils are allowed to flourish, individuality is always encouraged and allowed to blossom, but that pupils are challenged educationally by the splendid teaching staff in place. This was beautifully underlined as Madeleine Sava (W. 2004-09) swept in just in time to give her speech, having travelled from Hertford College, Oxford that afternoon. In a poetic flurry of pre-finals dread, Madeleine delivered a heart-felt speech about her time at the College, and how much more she appreciated it now she had left. She told tales of locking herself in her room with fellow Williams housemates, and instead of getting into dire trouble how impressed her House Mistress had been with their initiative in taking off the door handles whilst protesting against attending lessons that day. Madeleine regaled the room with her tales of being chased to get work in on time, and the full sporting and academic life she had enjoyed at the College, and continued to enjoy at Oxford (taking up the role of Sports Federation President for 2013/14 after graduating). Hugely impressive as always, Madeleine added a touch of glamour and humour and after the speeches the assembled OBs settled in to enjoy a wonderful evening catching up with each other and making new acquaintances.

'It was fascinating to talk to former teachers and housemasters, as well as pupils from past generations, to get a fuller picture of Brighton College life: the difference between "then" and "now", a "behind the scenes" view of daily College life, as well as hearing about the grand building projects. From a more specific point of view – and, indeed, a more self-interested one as a former student of music! – it is great to hear that Mr Chenery the music department will finally be welcomed up on campus!'.