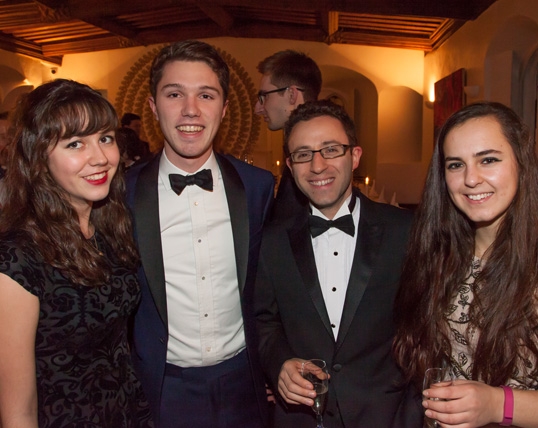 The now traditional annual Oxbridge Dinner was held at Jesus College, Cambridge University, to a guest list made up of current and past Oxbridge members, as well as notable members of the schools upper management. Jesus College is remarkable in both its size and ostentatious passageways and mazes that lead you through it. Once we found the Narnia-esque entrance to the hall, the delightful Rebecca Findlay greeted us. A drinks reception of prosecco saw the awkward formalities of having to make small talk with the Oxford clientele that much easier to bare. Needless to say, the comical late entrance of an Oxford geographer made the incessant photography a delight (Thank you William Sayer).

We began the meal, everyone nervously eyeing up the placard of his or her seating place. Despite a purely random arrangement, the placement of recent heads of schools was noted amongst the guests, someone obviously still has their favourites. The 3-course menu was clad with a variety of wildfowl, notably pigeon as a supremely decadent starter. In stark contrast to the usual Brighton College evening affair, wine was in full flow... Alan Bird cunningly avoiding the côte du Rhône in favour of a more pretentious chateau, possibly his favourite (unconfirmed reports).

We were then subject to the oratory skills by Daniel Chard (L. 2004-09), an old OB and ex-Cantab – we also suspect at the shorter end of the straw when decisions on after dinner speakers were politely requested/forcibly chosen by Richard Cairns. Needless to say, it went down a treat as he drew on comical references to letters dating back to the 1950s from Old Brightonians at Oxbridge. Evidently they used to drink more...curse those education budget cuts. An unusual choice of dessert of olive oil sponge was enjoyed with a rather fine muscato...albeit a dessert wine served by the waiting staff as a full bodied glass.

Unfortunately the Headmaster had to leave at this stage – sadly for us, tempting him with free entry to a local nightclub didn't work as well as we had hoped. Having induced the senior members of the management team to an appropriate amount of inebriation we hurried down to a cocktail lounge – Julian Withers in his element, something about being beneath the Pitt Club set him back to his Cambridge years at Homerton College... or maybe it was the copious amounts of bourbon. As the coach back to the 'Other Place' took off we said our good byes. Alarmingly the request to move on came not from current students, but we took heed and went to the nightclub. This is where the story ends - as tempting as it is to reveal the dance skill held by a certain economics teacher.

The world moves at such a dynamic pace, it is always a formidable feat to get everyone together for one night. As such a special thanks go out, on behalf of all guests, to Rebecca Findlay who organised the entire evening. I hope our oxford visitors enjoyed the evening; I absolutely cannot wait to visit Oxford...judging by this year, they certainly have a high bar to reach for.