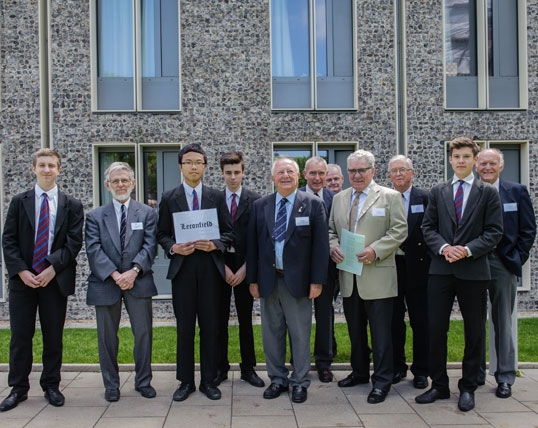 It was super to see so many past pupils, past and current staff and friends, reuniting in the quad and then in the Hordern Room (formerly known as the Chapel Music Room) for a catch up before chapel.

Alan Bird, Deputy Head Master, warmly welcome the assembled group, updating us on the latest news from the College. He also thanked the BC hymn book donors Philip Mitchell (Ha. 1960-65) and John Davison (Ch. 1951-55) brought together for the first time and OB of the month, and Lt Col Charles Alexander (Le. 1943-1945), who had flown over from the USA for the occasion.

Father Robert Easton then led the group into Chapel delivering a poignant homily on the adventures of Odysseus (below) and then invited Derek Jones (Ch. 1945-51) to the pulpit to recount his evocative reminiscences on "Sarge", Sergeant Major S J Beckett (College RSM 1919–1956. To finish off our Chapel service we all gathered under the rays of the mid May sun on the Chapel lawn and Father Robert blessed the benches of Sergeant Major S J Beckett (College RSM 1919–1956) and Sergeant Major Chris O'Connell (College RSM 1967–2000). Both benches are now in place above the Armoury, outside the Great Hall. Peter & Helga Miller were congratulated as they left the chapel, nearly 56 years after they originally married there, just shy of one day. Congratulations to them both!

Pupils met the assembled crowd on the lawn and confidently led forth to New House where OBs were able to inspect the College's newest boarding house and to see for themselves just how much boarding at the College has changed since the once familiar dormitories. The group were then split by House and were taken on a tour of their various old houses with current pupils (though the current members of Abraham House found it very strange that the OBs all knew it as Chichester, which is now a girl's day house!).

Lunch time soon approached and the Ginger Dog were surely ready to feed 80 very hungry people, which now included current House Masters and members of the Common Room. The 1960s leavers enjoyed their time upstairs in a private dining room whilst the rest had a wonderful time downstairs. All were then given an opportunity to browse through the new OB Merchandise and many proud purchases were made. (We look forward to seeing them at future reunions!).

The lovely food, clinking of glasses and non-stop conversation around every table was and joyous spectacle and a clear indication that this day will certainly be remembered dearly by all who attended. Many thanks to all who joined us, especially to Elizabeth Blackshaw for coming for the earlier part of the day, and our new friend "Bodge".

"Another really great occasion! Well done you and your team. Looking forward to next year already! Yesterday there were guys there I hadn't seen for fifty years. It was just great to meet up with them again."

"Thanks so much for a lovely day. Great to see old friends and see what an extraordinary school you have there."

"Yesterday was a real delight. Thank you so much for inviting me, and for looking after us all so well. It was lovely to meet old school friends, and to be shown round and see how splendidly the College has developed in recent years. The New House was, I think an estate agent would say, stunning."

"Thank you very much for organising yesterday's event. I think that it was more surprising than you could possibly imagine for pupils of fifty years ago, and the outstanding condition of the College is a tribute to all involved."

"Thank you for organising such a wonderful day. It was a joy. And Brighton College is quite transformed from my last memory of it going back to well more than fifty years ago. Very impressive!"

"Well done on last week, much enjoyed, and very impressed with all I saw. The benches are excellent quality"

Although it is some considerable time ago there has always been something visually missing at the College and that was recognition of the enormous contribution that SMB gave, a dedicated and loyal service over a period dating from 1919 to 1956.

He was part of the furniture, an indefatigable and inspirational character who enhanced the lives of all those who came to know him. He had no favourites and we could all expect the same from him. We are grateful and indeed better individuals for having known Sarge.

Who can forget the words "I will make you sweat until you see blood"? Mostly directed at those on school drill and I was one. He stood on the bank above the quadrangle bellowing his instructions as only a Sergeant Major can. How I disliked walking in a sitting position.

However, those of us who boxed for the College it was reassuring to have Sarge in your corner, frantically waving the towel between rounds, and his words of encouragement.

PT lessons in the Great Hall – up to the ceiling and back on ropes that thankfully held fast.

We are all pleased that a commemorative bench is now in place and thank you all for your contributions. A big thank you to Rebecca Findlay for seeing it through in her usual cheerful and professional way, and to Joyce Heater, our super Archivist, who must have burnt the midnight oil providing reels of information regarding Sarge enabling us to have a satisfactory conclusion.

In Homer's tale The Odyssey, written around 700 BC, we follow the awesome and adventurous journey of the hero Odysseus as he makes his way home after the Trojan War. Rowing his boat past seductive sirens, with lengthy detours because of the one-eyed Cyclops and lotus eaters, on through the straits of Scylla and Charybdis, Odysseus tries to get back home. Finally, after many a scrape and seemingly incessantly being chased by gods and monsters Odysseus makes it back to the island of Ithaca, to his beloved wife Penelope, his old, dear father Laertes, his eager son Telemachus and his old dying dog, Argos. Epic, heroic stuff.

For most readers, that's the end of the story. Odysseus, reunited with his family, reclaims his home from his wife's suitors, and everybody lives happily ever after. But, my pioneer friends, that's not the end of the story. In the final two chapters of the poem (so often forgotten after what seems to be an appropriate ending), Odysseus tells his wife that he's only stopping by, because soon he has to go on a new, second journey. It's a journey that's only mentioned once in the whole book, and yet a journey that Homer clearly considered absolutely vital to his central character's life.

Instead of sliding on his favourite cardigan, taking his favourite pipe from the rack and putting his feet up, Odysseus confesses to his wide-eyed disbelieving wife that he has to heed the prophecy he received when he when he was visiting Hades – the Underworld. Given all his other pressing exploits, it appears that he had half-forgotten what the blind seer Teiresias had told him about his future. Now that his journey is over, he remembers it all too clearly,

He is to leave home again. There are no detailed images of where he has to go or what he has to do, but there is equally no doubt that he has to go on another long journey – that one odyssey is not enough. Homer describes Teriesias's prophecy in these words.

Then came also the ghost of Theban Teiresias, with his golden sceptre in his hand ... When you get home you will take your revenge on those suitors of your wife; and after you have killed then by force or fraud in your own house, you must take a well-made oar and carry it on and on, till you come to a country where the people have never heard of the sea and do not even mix salt with their food, not do they know anything about ships, and oars that are the wings of a ship. I will give you this certain token which cannot escape your notice. A wayfarer will meet you and say [your oar] must be a winnowing shovel that you have got upon your shoulder; on [hearing] this you must fix the oar in the ground and sacrifice a ram, a bull and a boar to Neptune. Then go home and offer one hundred cattle to the gods in heaven one after the other. As for yourself, death shall come to you from the sea, and your life shall ebb away very gently when you are full of years and peace of mind, and your people shall bless you. All that I have said will come true.

In his spiritual work, Falling Upward, the theologian Richard Rohr suggests that our lives are made of two halves; in the first half we are naturally and rightly preoccupied with establishing our identities – climbing, achieving, and performing. But as we grow older, those concerns no longer serve us; instead, he argues, we begin to embark on a further journey – a journey that involves challenges and mistakes, loss of control yet broader horizons, and perhaps above all, limitations and suffering that jolts us out of our comfort zones. The second half of life, this "falling down" if you will, is actually, according to Rohr, a falling up. Rohr argues that our failing – physical certainly, but in other ways too – can be the foundation of ongoing spiritual growth. It is only those who have fallen, failed, "gone down" – as Odyseeus went down to Hades – who can truly understand "up".

The heartbreaks, disappointments and first loves of life are actually stepping stones to the spiritual joys that the second half of life has in store for us. It is the struggle that has made us "older" people "wiser" people.

On this day of celebration, when wise Old Brightonians come to reminisce, to share and to look back with fondness, it is perhaps healthy to consider that much lies ahead for us individually. In our different ways, on our different journeys, we have to be willing to be unsettled if we are to fulfil our purpose. We have to be willing to journey on. Collectively too, we are to journey on; as Pioneers, we are to hold onto that in the past which is good but also we are to press on with all this is good for the future this excellent place.

Just because we are inhabiting the planet some 2700 years after Homer, doesn't mean, of course, that we are any wiser than he was, and I believe there's much to dwell on in his wonderful epic poem – not least the thought that the second half of life (however you gauge that loose fraction) is one of spirited adventure.

May you travel well.