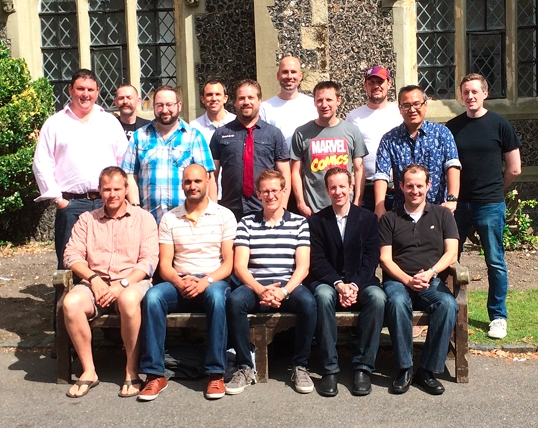 The last time we were together at the Bristol, on our last day of school, the Channel Tunnel had just opened, Nelson Mandela was two months into his Presidency, and the Apple that had fired Steve Jobs was failing to convince the world that it needed a portable digital assistant known as the Newton.

Twenty years later, iPhones in hand, we reconvened at the Bristol for a reunion arranged via technologies that none of us had dreamt of in 1994 (if only we had...). After a spot of lunch and one or two socially-lubricating alcoholic drinks - I think it's fair to say that many of us admitted to a slight apprehension about the reunion - we made our way to the College to meet Angelina and Abi of the OB office to see how it had changed in the last two decades.

And how it has changed. Fancy new buildings and extensions have sprouted seemingly anywhere that there was an available nook or cranny. Houses have moved location and in one case (Chichester) even changed sex. The tuck shop, that tooth-rotting, Empire-building bastion of the British public school experience, is no more. Instead of lining up to spend pocket-money on sugar, pupils now gather over coffee, or work out in a gym located in what was once the Kingscliffe School hall. Most startling of all though - and perhaps a defining symbol of cultural change at the College since our time - was the disappearance of the drill board, graced by my own name on more occasions than I care to remember. It has been replaced with a "distinction list". (It may also shock OBs of my and previous generations that pupils now address masters by their first names. What this has done to the time-honoured tradition of giving masters nicknames, I'm not sure).

Amongst all the change there were some comforting constants. There was audible delight at discovering we could still get to the swimming pool balcony via a not-so-secret door at the back of the stage in the Great Hall. The sports hall hadn't changed at all and we chuckled at the memory of being timed to get all the equipment out of the cupboard at the start of P.E., but rather self-defeatingly if this was not done within an acceptable timeframe, being made to put it all back and get it out a second time. The Chapel, still littered with the last day of term service programmes, was so familiar that we all instinctively headed to the areas where we used to sit. (None of us on the tour were "Non-Chapel", that wonderful term used for people of other faiths who would sit out morning services in the library, now spruced up and looking very well stocked. I do hope there is also some provision these days for people like me of no religion). Hampden, my own house, was thankfully exactly where I had left it, although Simon Middleton may be disappointed to learn that the lockers have been replaced.

The successes of the College in recent years have been impressive and I for one couldn't help but feel envious of all that is now available for current pupils. As term had already finished, we were unable to get the low-down from any of them, but my overriding impression was that our successors are encouraged to feel more like young adults than was customary in our time, with a huge variety of outlets for their curricular and extra-curricular energies.

On behalf of all of us who took the tour, many thanks to the OB office: to Rebecca for facilitating our visit and to Angelina and Abi for so generously giving up their own weekend time to chaperone fifteen adults temporarily regressed into their teenage selves, for one brief but most enjoyable Saturday afternoon.