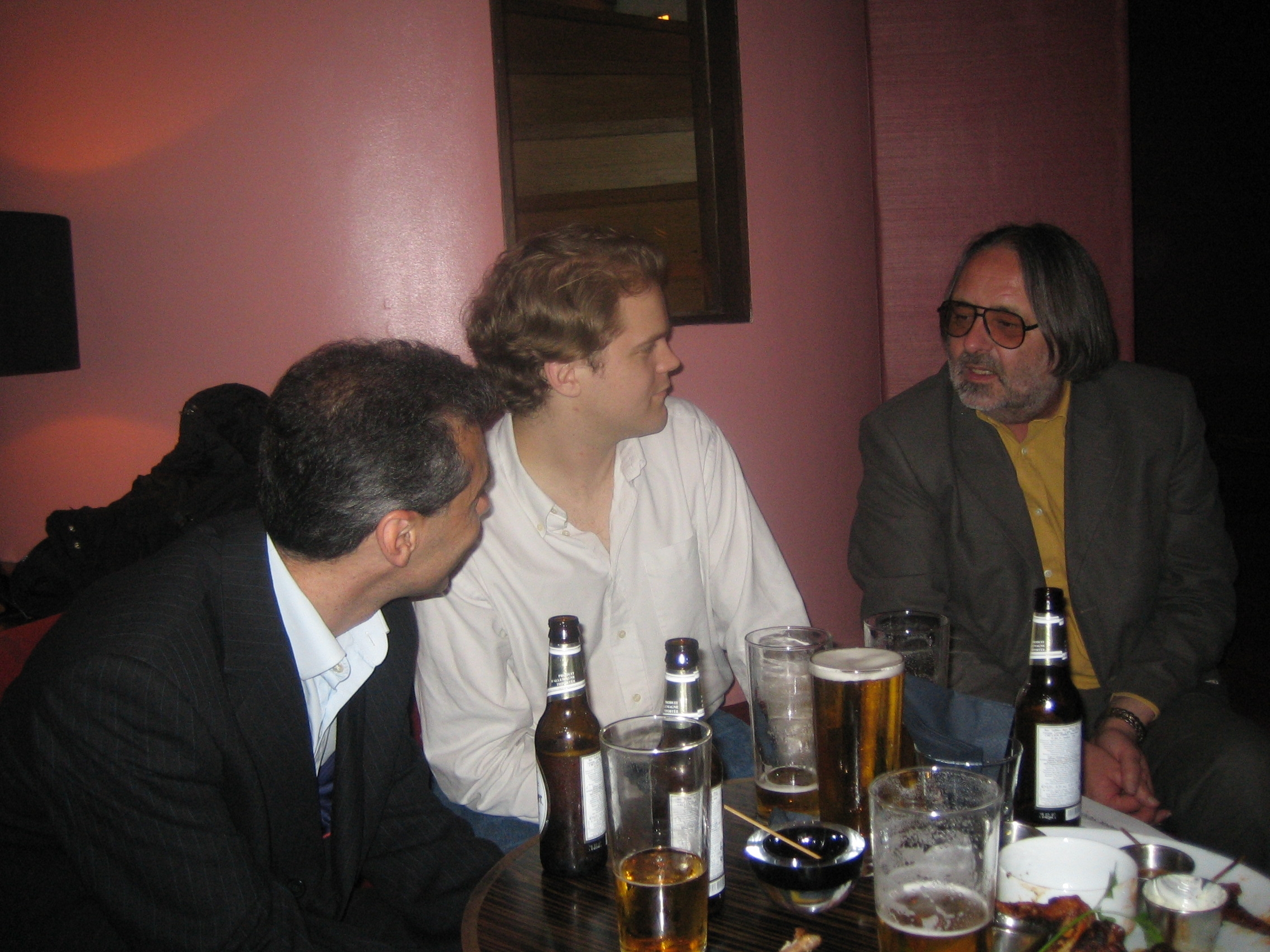 The second London Drinks of 2006 was a select affair - but a hugely enjoyable evening nonetheless!

Just twelve OB’s gathered this evening, joined by two wives and a master. When I arrived, our President David Gold (S. 1986-91) had installed himself with various early arrivals in a lounge that had been set aside for us. Tonight we were the guests of Duncan Watts (R. 1979-84) in his fabulous Mayfair restaurant, Rocket... and over-the-moon about it we all were! Some of us have frequented this place before, and all of us can now heartily recommend its fare! We look forward to enjoying Duncan’s hospitality at the next London Drinks – possibly at his Putney Bridge restaurant, or more likely at his new City venue opening in August.

It was terrific to see the much loved and respected former housemaster-to-the-masses, Tony Whitestone, who had travelled up from the coast to see us. Tony was on great form, and held court as OBs queued to regale him with their tales of derring-do in the years since they had left his care.

Martin Brass (C. 1978-83) is one particular OB who has led a fascinating life since his years at Brighton College. We listened intently as he told us of his time in New York producing albums for Lou Reed, John Cale and Velvet Underground. Martin has in his career produced over 70 albums, and now runs a corporate strategy company here in London - which I imagine is a lot less stressful than managing Messrs Reed and Cale in NYC!

It seems that John Vadgama has led a life of collecting... Caterham 7’s, Popular music from the 60’s, or an extraordinary selection of hifi equipment - all are eagerly acquired by John. His prize Caterham was the actual 7 used in "The Prisoner" - signed by Patrick McGoohan, no less!

We were joined early in the evening by the long-absent Adam Goldman (H. 1979-84). Although Duncan had been to Exeter University with Adam, Adam Belson (R. 1979-84) and I hadn’t seen the ever-youthful Goldman since school, and it was wonderful to see him again after so long. It’s extraordinary how these evenings turn up these old faces, and we really hope that Adam will choose to stay in touch with the Association, and to that end I am hassling him to join me in taking a table at this year’s Annual Dinner.

It wasn’t long before another old and familiar face showed itself in an astounding display of timing worthy of the best theatre magician... Duncan was trying to remember the name of the OB who had had his poem published in the Brightonian magazine years previously only to be rumbled when somebody realised that it was actually the lyrics to a heavy metal song by "Rainbow". Adam and I were just telling him that the culprit was one Andy Bacon (C. 1978-83) when who should that very moment walk in but Mr Bacon himself! Andy and I had been great friends at school, and despite the occasional meeting had been pathetically poor at staying in touch. Andy is still in touch with James "Slug" Simpson (C. 1978-83), John Hinkson (C. 1978-83) - whom he and his wife had recently visited in the US - and fellow attendee Martin Brass. It was great to meet his wife, Linda, and to catch up with news. Ten years ago Andy and I had organised a fantastically well attended reunion of leavers from 1983 and 1984, and noting that in three years time we would be celebrating 25 years since we’d left the College we resolved to organise another bash of similar stature for our fellow leavers... watch this space!

A stalwart of the London Drinks is Matt McCabe (H. 1976-80). Matt now works in the Civil Service, in the capacity of marketing the Government’s new Health and Safety initiative. Matt was joined by Paul Birch (B. 1979-81) - now a specialist in computer forensics. Both held my brother Jack (BCJS 1990-94) enthralled with tales of their professional exploits. Jack has a growing need to make the world a safer and better place to live, and since Wandsworth Council won’t sponsor him to be a caped super-hero, he’s resolved to become a special constable or something, and rid the world of computer-related crime and offices of all unnecessary sharp objects.

Our sincere thanks go to Duncan and his ever-attentive staff for a wonderful evening, as well as to David for organising these terrific gatherings - please join us at the next one!