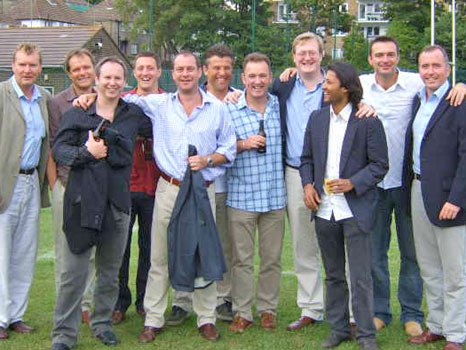 In spite of all the rain dances and prayers for divine intervention to assist the England cricketers at the Oval, Brighton College was blessed with warm sunshine for OB Day, which was fitting because for some, it was their first visit in many a year.

Father Robert set the tone for the day with a short but poignant service. He recalled conversations with many OBs who return after a long absence, reflecting on the many changes to the College, but always grateful that the Chapel remains a recognisable place at the heart of the College community. As he spoke, some of us were delighted to be seated in the same places we had sat 10, 20, 30 and in one case, 51 years ago, when the place smelt as it does today – a rich aroma of wax polish and fragrant flowers. As we sang Jerusalem, it really did seem only yesterday...
From Chapel we proceeded to the Hordern Room for coffee, an appropriate venue for OB Day as it is named after the venerable actor and OB, Sir Michael Hordern – the voice of Paddington Bear! The College Archivist, Joyce Heater, had carefully selected images of the College’s history from the start of its second century. It was entertaining to watch numerous OBs spot themselves in photographs or roar with laughter at the sight of the mascots taken on numerous rugby excursions. The straw boaters and multi-coloured caps were also a source of considerable interest!

Photographs and reports of the OBA sponsored Tour of South Africa, which involved College rugby and netball teams, were also on display. Clearly, those fortunate enough to tour spent time learning the harsh realities of modern South Africa as well as the passion their opponents display in sport! Photographs and reflections of their visits to the townships were very moving.

As we headed up to the Home Ground to watch the Old Brightonians do battle with Eastbourne, the crowds were swelling and it was a pleasure to see so many new (old) faces. A spirited game resulted in a modest defeat for the OBs, but we take comfort from the fact that Eastbourne was victorious with the loan of an OB to their team!

With a full house at Lunch (in excess of 90 guests) the Headmaster welcomed OBs and seemed genuinely moved at the sight of so many of us at what is growing to be a popular event in the OB tradition.

The afternoon provided, for many, the highlight of the day’s events. As well as the College First XV seeing off a strong challenge from St Paul’s, OBs queued for access to the Armoury and kept the RSM on his toes for much of the afternoon! Meanwhile, College Prefects kindly gave up much of their Saturday afternoon to guide OBs round their old houses and many of the new facilities of the College, including the Montague Centre. It was fascinating to watch grown men and women transform before our eyes, returning to their teens as they remembered their youthful exuberances, many of which cannot be repeated on a family website! It is worth noting that whatever people say about the youth of today, even some of the Prefects seemed shocked at what College pupils used to get away with!

The day concluded with a generous Bucks Fizz Reception on the Headmaster’s Lawn, to which current parents were also welcomed. It is an important part of the OBA’s role to integrate itself into the life of the College and its current pupils, parents and staff.

Our thanks must go to all those who put such a huge effort into making Old Brightonian Day so special, not least Fiona Aiken and members of the Committee, the catering team, porters, the College Archivist, and the Headmaster for allowing us to take over the College for a day. Most of all, a huge thank you to everyone who attended. Without you, it simply wouldn’t be OB Day. Let’s hope that next year can be bigger, better and even more popular.