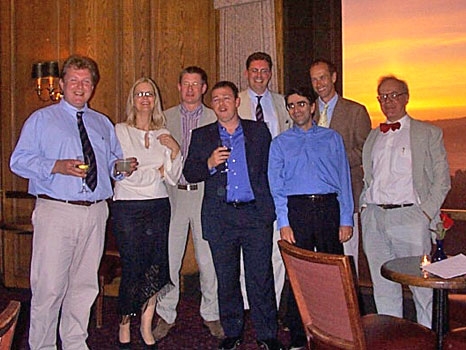 The 2nd OBA US Dinner was held in the Pacific Room at the Carnelian Room which is in the City's Bank of America building. Ingram Losner (D. 1973-1978) organised a sensational dinner in an extraordinary setting. The Pacific Room was for those of us not used to eating dinner on the 52nd floor of a skyscraper quite the most wonderful experience! The view alone was worth the trip...

The day had started early for 3 of us - Alex Bremer (R. 1979-83), Mark Green (A. 1972-78) and Alan Chesterfield (D. 1973-78) - meeting at The Presidio Golf Club - a stunning course and a beautiful day! We were particularly amused by the GPS powered computer screen that plotted our every movement around the course - offering food and beer as we neared the 9th, giving exact yardage as we scooted up the fairways, and of course pulling us up for slow play!

All things considered we all played pretty well... Alan played like a master - driving hard, straight and far off the tees just to annoy us! Mark and I played our own game of hit-the-tree pretty successfully, and I only lost one of the 28 ASDA golf balls I'd brought specially all the way from London (I'd reasonably expected to lose all of them!).

Mark and I were engrossed in our own little battle for 2nd, and to be fair I thought I'd won it when Mark sent his ball into the thick undergrowth on the 18th at about 200mph. The fact that he found the ball mattered little to me; so buried was it that I anticipated a good 20 or so hacks at the thing before it might dribble miserably back onto the fairway. "2nd place is in the bag", thought I... until some miserable little worm in Gold Club Clobber came bombing our way in his electric staff car to cheerfully inform Mark that due to a high local snake population in that particular square foot of undergrowth the sod could take a free drop! For a short while I contemplated running the little nazi over in my own battery powered bat-mobile, but thought better of it.

Mark was insufferably smug all through dinner...

So, via a couple of sharpeners in a downtown bar, it was on to dinner at the aforementioned venue. A small but friendly collection of OB's met for cocktails at 6.30pm, joined by Mr and Mrs Guy Bradshaw and myself at 7.30! We caught up quickly and several fine margeritas later sat down to enjoy a fabulous meal involving fish, cattle and poultry in varying amounts.

We were regailed (sp?) with tales of derring do by assorted old boys and girls, most notably John Clay (B. 1965-67) who had us in stiches... and I can't quite remember why!