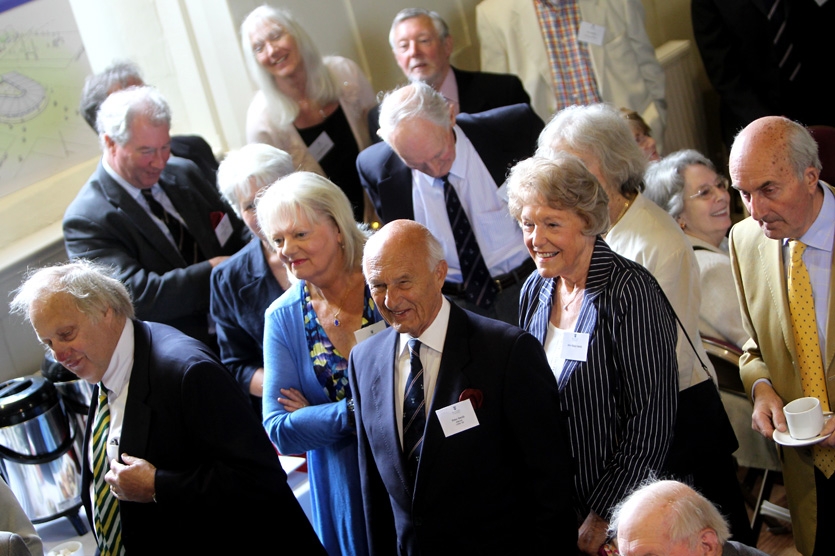 Well what a wonderful time our Pioneers had in the Chapel Music Room, or Room D, or as it is now known it the Hordern Room after OB Michael Hordern (C. 1925-30).

The day started with a little drizzly rain, but not enough to put off our Pioneers, some of whom had travelled great distances to come back to the College on Thursday 5th May. Simon Smith, Second Master, gave all a warm welcome especially to our earliest Old Brightonian who had been at the College in the 1930s, namely John Osborne (C. 1931-34). Debra Chalmers, Director of Development & Alumni Relations added her welcome too and spoke about the work of her office for the Old Brightonians and of course the more philanthropic elements of the Development Office. Father Robert Easton led a vibrant and energetic service in the chapel, with some very fine singing from all, and a ‘tour’ of the Chapel from the dreaded corner in which three swords hang Damocles like over any pupil who sits below, to the beautiful Byrne-Jones windows.

He underlined most poignantly how little the Chapel had changed over the years, whilst the school around it grew in size and number and energy, and underlined that the Chapel is there for all pupils and Old Brightonians, unchanging in its welcome and atmosphere of calm and restoration.

Having enjoyed the hospitality of the College, we moved on to a diversity of restaurants, including 24 St George’s Restaurant, recently acquired by Jamie Everton-Jones (D. 1990-95), who was also the chef for the day. The company and the food were excellent. Photographs were passed around, and many a pleasant reminiscence was to be heard echoing around the restaurant. Another group of Pioneer OBs was to be found in The Ginger Dog (formerly known as The Wellington) where a good time was had by all. The links between the past and the present are important to us here at the College, and we warmly welcome back our Old Brightonians, young and old. Our past pupils may be gone from our hallowed halls but they are not forgotten, as our USA OB Ambassador Ingram Losner (D. 1973-78) rightly says, “you can take the boy or girl out of Brighton College, but you can't take Brighton College out of the boy or girl!” Indeed this was beautifully illustrated when our OBs persuaded one Fergus Blair (Hampden U6th), who had come down to the restaurant to take anyone who wanted a tour back up to the College, to sit down and enjoy dessert with them; such was the bonne homie of the day.

“A delightful day....great to meet old friends, some of whom I had not seen since the early 1950's, it must have been a deal of work for you, but the outcome should have given you immense pleasure, as it most certainly did us!” Jack & Marion Hayes (L 1951-54)

“What a change since I was there 60 years ago, a change even since my son was there 30 years ago. There seems to be so much life and enjoyment everywhere. I almost wish that I could have my time at the College all over again, so that I could enjoy the facilities and ethos which were absent six decades ago. We look forward to future reunions.” Pat & Christine Lyford (C 1949-55)

“Thank you and your team for the splendid occasion yesterday. It was really enjoyable. Great stuff!” Elizabeth & Mike Senyard (A 1950-53)

For those who may have missed the tours, we have arranged a few dates in case you would like to come back in - Wednesday 8th June at 2.30pm and Tuesday 14th June at 2.30pm. Please contact Rebecca Findlay in the OB office.

The next Pioneers Club will be held in London on Thursday 8th December.