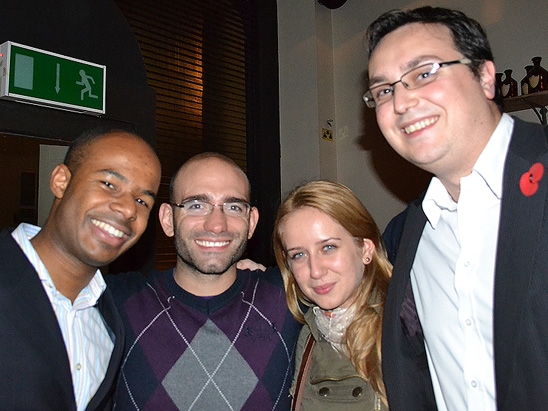 The Ebury has recently become our bar of choice being so close to Victoria Station, rather charmingly planted in the leafy streets of Belgravia, Pimlico, and so terribly convenient for our London and Brighton OBs. It does have one particular problem though, in that it has a namesake around the corner, and hence some of our OBs went on a little tour of drinking establishments before finding the correct Ebury. However, this didn’t dampen our evening on Thursday 10th November, and the eclectic range of OBs that find their way to the London Drinks had a suitably good time.

As usual we had quite a spread of ages represented, and of course everyone eventually finds something in common, whether reminiscing about the windswept fields of the New Ground (which never changes!), or being lampooned into coming back to the College to offer careers talks and advice to current pupils (a more recent phenomena). John Aiken (A.1976-81) was congenially propping up the bar with a few rugby boys, Kevin O’Mahony (R. 1979-84) and Benjamin Stott (R. 1979-84), though I am poetically applying the term boy now, as many of them have grown up children of their own! Peter Cockburn (S. 1959-64) had already spent a day in London, but was as spritely and dapper as ever. John Polsue (B. 1965-69), Barney James (H. 1993-98) and Ben Carter (C/S. 1993-98) were on fine form, and Ben Salt (A. 1996-2001), Louis Dale (H. 1995-2000) and Oliver Kallenborn (L. 1996-01) were found loitering on the other side of the bar before being lured into the OB cosy corner.

A convivial time was had by all, and rash promises made by OBs to bring more fellow Old Brightonians along to the next drinks on Thursday 26th January 2012 – a promise to which we will of course hold you all to!