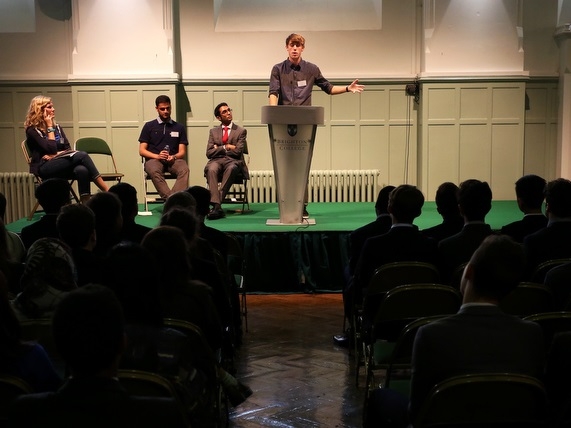 Thursday evening saw nine of our Old Brightonians return to the College to share their ‘Oxbridge experience’ with our current Oxbridge hopefuls.

The evening began a welcome from Mr Bird and Mr Majithia followed by talks from Osaid Ather (Al. 2009-14), studying Medicine at Downing College, Cambridge who shared the benefits of studying at Cambridge; Tom McQuillin (Le. 2012-14) studying PPE at Lady Margaret Hall, Oxford who shared a typical day for him as an Oxford student and Corinne Hull (Ch. 2005-12), studying Theology at Downing College, Cambridge who shared her top tips for writing a personal statement and having confidence in interviews. The group then divided off into different subject areas to take the pupils through some mock interviews and give them the chance to find out the realities of applying for and studying at Oxford and Cambridge, the evening then concluded with a Q and A session back in the Great Hall. Thank you again to all our OBs who came back to the College and we wish you all the best as you head back to your College’s and beyond!