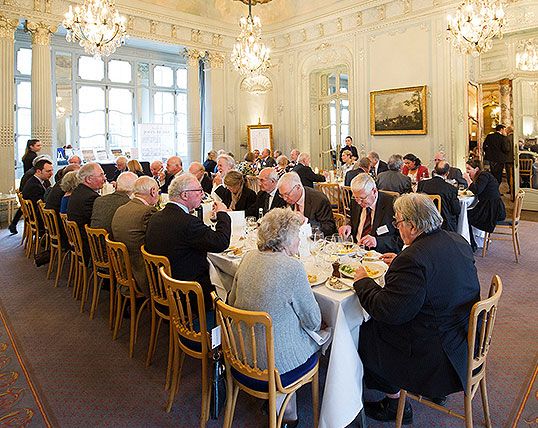 The Pioneers Club was once again warmly welcomed by the Savile Club for this year’s London Luncheon, hosted by Gavin Henderson, CBE (Le. 1960-65).

With an excellent turnout of OBs, some of whom still remember Gavin as a child running around the Quad, we enjoyed a lovely two course luncheon in the beautiful surroundings of the historically and culturally renowned Savile Club. John Blake (Br. 1957-61) brought along a few of his books surrounding topics of Naval History such as Sea Charts, and the Titanic. Amidst the wonderful lunch, we were treated to some of Gavin’s recollections as well as histories of the Club’s décor, and an informative update on the College today from Development Manager, Rebecca Findlay. Neville Abraham (Bristol, 1950-1955) warmly thanked Gavin for hosting the gathering and encouraged all those present to visit the College.

Thank you again to all who attended, we do hope to see you at the next Pioneers meet up in Brighton on the 18th of May! If you can’t make this date but would like to visit the College for a tour please do contact Veronika Neroj in the Old Brightonians office on This email address is being protected from spambots. You need JavaScript enabled to view it. or telephone 01273 704 355.

Join us back at the College for a tour of new developments and some familiar haunts followed by lunch at The Ginger Dog.