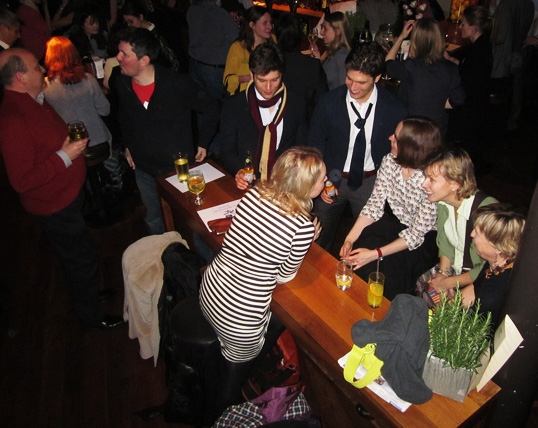 The great risk of turning up early or on-time for these gatherings is that you are inevitably faced with the prospect of some time alone at the bar looking pretty sad… or worse still being stuck with some frightful character whose company quickly becomes tedious.

I was therefore delighted that tonight my promptness was rewarded with the presence of Rhona Grant (F. 1980-82), Katharine Stoddart (nee Grant, F. 1981-83) and my life-long drinking buddy, Adam Belson (R. 1979-84). The four of us made for a small and cheery group happily ensconced in memories of the College in the 80’s as other OBs arrived to join us – indeed, we were just talking about Dr Bridget MacDonald (F. 1981-83) as she wandered in!

We were joined by the evening’s organiser, Alumni Administrator, Rebecca Findlay, and shortly thereafter John Vadgama (S. 1964-68). It was great to see that Paul Witts (L. 1978-81) was in town, and Sam and Jamie Edge (both R. 1996-01) followed soon after Paul. Adam and I hugely enjoyed sharing tales of Ryle House with Sam and Jamie, and it was great to hear that things seem to have changed very little in the nearly 20 years that separate our Brighton College careers.

Around 9pm it began to occur to me, in this post-Christmas season of abstinence and good behaviour, that it might be time for me to head home when in fell Guy Bradshaw (R. 1979-84) and Rob Bourne (R. 1980-85). These two had clearly started the evening much earlier elsewhere, and they carried with them a sense of purpose that inspired us all to step up our game…