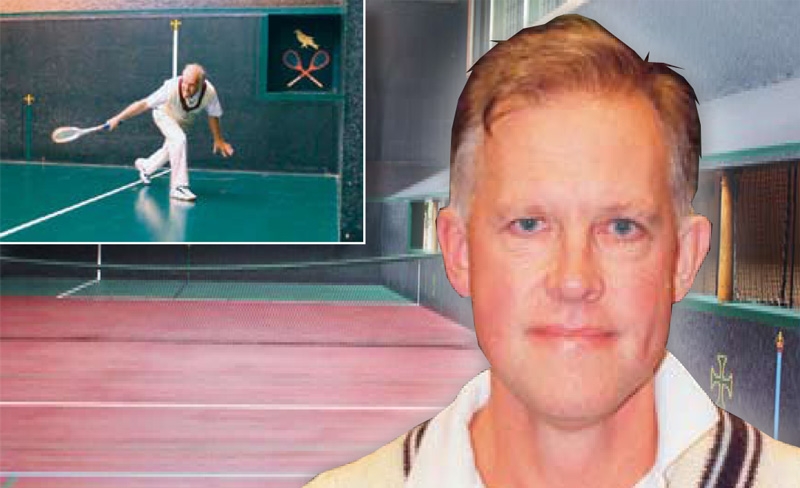 Written by Richard White (S.1960-64)
Friday, 29 July 2011
Richard White works as a lawyer-linguist in the English-language translation unit at the Court of Justice in Luxembourg. When he was an undergraduate at Oxford University, he was introduced to ‘real’ tennis, or jeu de paume, the ancestor of modern day lawn tennis. Now in his sixties, he is still an avid player. Commission en direct spoke to him to find out more about this historical game.


How is this sport’s history entwined with European history?
In the Middle Ages it was very popular among European royalty and nobility, so I guess an enormous amount of state business was probably conducted in and around their tennis courts. Henry VIII of England and François 1e were very keen players and prolific builders of courts.

Henry VIII is said to have been in the court at Hampton Court Palace, where I also love to play, when he was informed of his wife Ann Boleyn’s execution. Henri IV, whose mother Jeanne d’Albret was a skilled and ruthless player, played regularly for exercise and relaxation. It is said he had a court built wherever he went. Rizzio,
Mary Queen of Scots’ counsellor (and reputed lover), was murdered when he was cornered by assassins whilst playing tennis. The painter Caravaggio was always thought to have fled Rome after murdering Ruggieri, his opponent, after an argument over a disputed bet on a game of tennis (pallacorda). Charles I of England is said to have been playing in the Merton College court at Oxford (where I learnt to play) with his nephew Prince Ruprecht of the Rhine when he was informed of his proscription by Parliament. In the tradition of English
heroes, he ‘carried on with the game’. But, of course, the most famous historical event to take place in a tennis court (though it didn’t involve a game) was the Tennis Court Oath – le serment du jeu de paume – of 20
June 1789, a seminal moment of the French Revolution, when the deputies of the ‘Third Estate’ assembled in a ‘real’ tennis court and swore not to separate until France was given a Constitution. David’s famous depiction
adorns the Versailles court where it took place.

What are the main peculiarities of ‘real’ tennis compared to lawn tennis?
Well, the main difference is that ‘real’ tennis is played indoors in a ‘court’. The court, apart from being divided by a net in the middle, has a covered corridor with a sloping roof along three of the walls, respectively one side wall and the two end walls.

The peculiarity of ‘real’ tennis is that the walls and the sloping roof of the corridor keep the ball in play, as in squash.

The game is played with asymmetric wooden rackets, and the balls, which are still hand-made and hard, sometimes become misshapen, behaving erratically and unexpectedly.

The rules of the game also include many peculiarities, like the rule that a point is not concluded on the ball’s second bounce, as in lawn tennis, but the point is replayed later as a ‘chase’, giving you the chance to
win the point instead of losing it.

What is the history of this game?
The origins of this game are quite controversial. Since the structure of the ‘real’ tennis court resembles somehow the interior of a monastery cloister, one of the main hypotheses was that the sport was originally played inside French monasteries. But there is no real evidence for this. Another hypothesis is that the game derived from the Italian game of palla, played with bare hands in the streets of Tuscan hill towns. What is known, for sure, is that the game was already established in its modern
form by the end of the 15th century.

Eventually, in the 1870s, the English upper classes started wanting to play the game outdoors, on their lawns, during summer. This led to a change in the game’s features, with the subsequent birth of modern tennis.

Why did you choose this particular historical sport instead of playing a more widespread one, like modern tennis?
I still enjoy playing several other games. I play squash competitively for the European Investment Bank in the  Luxembourg league. Unfortunately, at the age of 64, I can no longer manage Luxembourg Squash tournaments. On the other hand, I can just manage to play tough ‘real’ tennis matches on consecutive days. It’s a game that one
can play, especially doubles, into one’s 80s. I also love playing lawn tennis with colleagues, friends and family, but I hope to be able to continue playing ‘real’ tennis competitively until I ‘drop’, possibly on
court!

What benefits do you derive from it?
Physical and mental exercise and relaxation, along with pure enjoyment, even after losing. I love the great sportsmanship, camaraderie and hospitality amongst the game’s players wherever it is played, as well as our common enthusiasm for all the game’s history and bizarreness.

Occasionally, spectators say they like watching my ‘classical’ style and my perseverance no matter how bad things may look.

I treasure my very many happy memories of matches with a legion of genial interesting opponents, far too many of whom now, alas, grace that great tennis court in the sky.