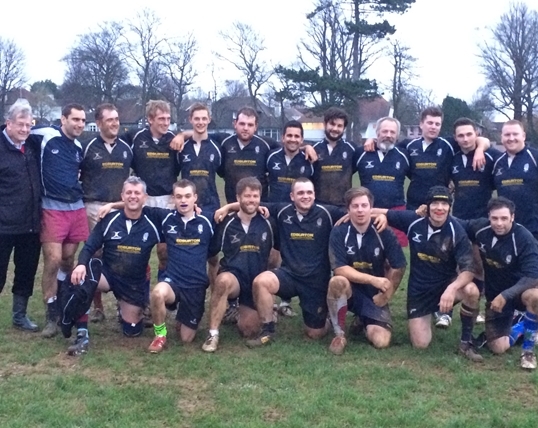 Honouring Peter Rumney (Ha. 1937-39), the OB RFC took to the field of battle, with a good mix of ages, on the 27th December against a youthful Hove XV. A huge thank you to all players and supporters who came out to fight the good fight and show their support. Particular thanks to the Rumney family and to Tim Loadsman (Le. 1951-57) who did a superb job as linesman.

The second half was a different story, as fitness became a factor and discipline started to falter. Hove utilised their 7 young subs and dragged themselves back into the game. OBs brought on a couple of their own subs, one highlight having father and son playing together for the first time, Joey (Du. 1979-84) and Luke Appleton (BCPS 2005-08).

Chris Canneaux (Ha. 2001-06), Man of the Match, did everything and more to keep OB’s on track, unforgettably scoring direct from a kick-off but more importantly leading in yards gained, tackles and turnovers. In the dying seconds the OBs battled hard defending their line, Lawrence Daraio (Al. 1996-2001) in particular making important hits.