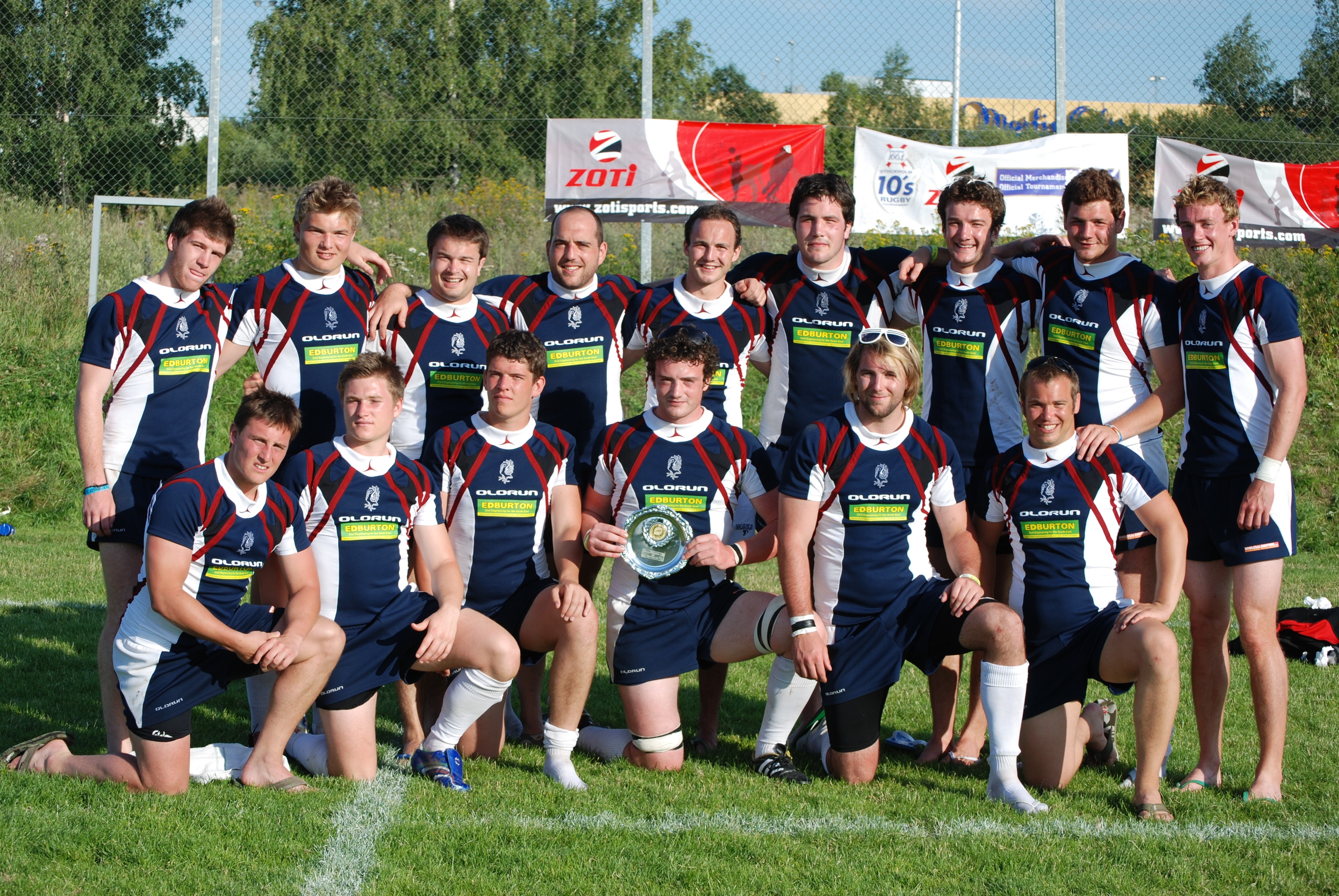 Stockholm in July, sits quietly, confidently and cleanly, amongst its cobbled medieval streets. The great pine wilderness on its doorstep stretches into the distance, as far as the Baltic archipelagos. The warmth of a Scandinavian summer gently envelopes its green and pleasant shores like the slowly lapping waves of the fjords; gone are thoughts of chilling winds and thick white powder - the ground is as hard as granite, this is the dry season and it’s perfect for tournament rugby!

To go into my usual repetitious prose, complete with historic analogies for each game would require a War and Peace sized novel, such was the gargantuan effort employed by the chaps. So instead I shall give a short paragraph on each player to convey their part in what was a wonderful effort all round, which culminated in Old Brightonians winning the Men’s Open Plate - our first international success!

Adam Phillips
This chap is without doubt one of the most gifted rugby players I have ever seen. If this boy is given the sort of space he was afforded in Stockers you'll be made to pay. With 9 tries in six games and countless conversions he was overall top scorer and simply spell- binding to watch in attack with jinking runs, deft off-loads and impossibly accurate re-starts. For once you can believe the hype, this boy is 'that good' and I think we've found a game in tens at which he can be truly world class. Why he isn't playing national rugby week in week out is a complete mystery to me.

Tom Howell
He has height, strength, power, skill, intelligence. This ex- international is oozing quality. When he decides to shift into 3rd gear, opposition quite literally fall over. With 8 tries and so many more assists he was our danger man in the backs. The problem the opposition faced with Tom was that he can go through, over or around you; it doesn't really matter, it’s just a question of when not if. Like Adam I feel a return to the national/international scene is certainly still achievable if Tom so wishes, but until then it is a pleasure simply to be in the same squad as a player of his undoubted rugby pedigree and a real object of pride for the Old Brightonians.

Andrew Hodgekins
Now you don't captain the College 1st XV, play 2nd team Rugby in the back row for NEC Harlequins, play number 8 and captain the Loughborough University 1st XV unless you're someone very, very special. Andy is that and more. Player of the tournament for the OB's, this man is as big as a truck as fast as a centre and hits bigger than a white rhino; in fact I've never seen a human being crumple in contact quite like I did in Stockholm. His ball carrying and off-loads are great assets (producing two tries throughout the tournament), however, it his general presence on the pitch that is such a massive lift for all his team mates, I think I speak for all when I say that, with Andy on the field, everything looks a lot more achievable.

Rupert Baldwin
Super hands and technically excellent, Rupert also possesses good physicality for a flanker who wears white boots. His tireless work and excellent linking play offered the OB's a vital asset that so many other teams lacked. Not many forwards are happy to chip and chase, me being one of them, but Rupert is more than capable, an impressive athlete, good lineout player and invaluable squad player. Think Richard Hill but with Magnus Lund flair.

Harvey Strudwick
The Big Yellow Storage Company, this man has a huge head (it’s massive!)He also has an immense amount of courage which, coupled with a powerful and dynamic playing technique, afforded him with two tournament tries and considerable respect from the squad. At 18 years old he was more than happy to wade in at hooker or prop and cut down anyone who ran at him. Exceptionally mobile around the field this natural born fetcher was vital to the OB's victory and bought great fun in the post tournament social. The only thing we probably wish Strudders hadn’t bought with him to Stockers was his all to realistic impression of a dying rabbit, I never quite shook off the feeling that I was being followed around the sites of Stockholm by the entire cast of Watership Down.

Tiaan Visser
One of three invited South Africans from my club London South Africa, Tiaan’s selection was a pleasure for me. You will not find a finer out and out open-side flanker in the South East outside the national leagues. His tackling is spectacularly vicious and highly acrobatic, with dump after dump raining in from every square foot of the pitch. He is at his predatory best when hunting down his quarry from behind with exceptional pace for a forward; he is also very hard to bring down whilst carrying the ball, and a couple of tries is testament to it. Having to scrum at loose head out of position and doing a fine job of it, helps to perfectly captivate this player’s persona: hard, unrelenting and a real trencherman. Off the pitch his banter is invaluable as well and he was justifiably awarded man of the tour by the OB's.

James Baldwin
The boy has lots and lots of speed - if you haven't caught him after 10 yards, give up! With 4 tries, this baby-faced assassin also showed that his improved physicality is now something to be reckoned with. Some good defence and excellent power close to the line showed he is turning into a quality winger in all areas. Think Paul Sackey - at first a speed demon capable of playing rugby, now a very capable rugby player who has become even faster. I'd say James could well go far with his rugby with more regular game time: he certainly has all the raw ability to unlock even the most stringent defences. He looked a class act in Stockholm.

Matt Fendick
Award for 'The So Solid Soldier' of the tour goes to Safa number two - "Fendy". He is so versatile, commanding expertly at fly half or centre, a great ball carrier and solid in defence; he also has the gas to do a job out wide. Every squad needs their Austin Healey and Fendy was ours, his hands afford him the luxury of so much time on the ball, and as a result his distribution was excellent all tournament, a real asset to the team both on and off the pitch.

Tom Hird
The man with the most uncomfortable smile on tour made the opposition feel equally the same way in contact.A great moment in the final game of day one against home side Stockholm Exiles saw a would be tackler squeal in agony as his body made contact with Hirdy in full flight. This boy always gets a place on my 1st choice OB's XV sides , not just because he tackles like "crazy horse" Lewis Moody, or runs harder at you than Lomu with a jet pack on his back, not just because he can play practically anywhere “out wide” but because he is one of a rare breed in life who gets it done no matter what the obstacle. Outstanding tourist with excellent chat.

Hugo Baldwin
I got a try!

Tom Aiken
Showed his true class with two wonderfully taken tries in the semi final. His rush defence was inspiring whilst his knowledge in attack is far greater than his age would suggest, and added to this is his excellent physical condition for an 18 year old .Tom demonstrated to all on this tour why he was skipper of last season’s College 1st XV.

Ben Maidment
Everything about Ben is big - huge in fact. At just 20 years old he was by far the biggest player of the tournament, his ox like shoulders smashing huge holes in desperate defences. As a ball carrier this England student representative is unrivalled in the country at his age group, his defence is also very impressive, a natural at 8 Ben showed his class having been out injured for some 6 months before this tournament by taking each game by the scruff of the neck with supreme conviction. A big man for a big occasion.

Vaughan Gilson
Best scrum half at the tournament, period. Excellent distribution and tenacious tackling around the base of the scrum, Vaughan’s performances throughout ensured he played nearly very single minute of every game. As well as chipping in several tries Vaughan showed some brilliant leadership skills and bossed his pack with the tenacious ferocity of Bonaparte and skilled aplomb of the Duke of Wellington.

Tom Hayward
His co-ordination and technical ability allow Tom to play anywhere in the backs and I used this to the max in Stockholm. Bar one thrown interception he was perfect, never missed a tackle distributed the ball with effortless magnificence, the ball floating like an arcing tracer bullet through the air whenever he released it. A definite gem to be nurtured for the OB’s in the fly half position, his kicking ability is outstanding and in the final and semis he showed his defence to be equally as dynamic and well executed.

Laurence Hewitt
Great tight work and very useful in the loose as well even if he did get lost after throwing a dummy pass and finding himself in way to much space. He is a fantastic link player in attack and his lineout throwing was as ever perfect with 100% success on our ball. Laurence was as vital as anyone in securing victory and his banter throughout the tournament was excellent.

Martin Baldwin
Came, saw, conquered, and took 1400 photographs! He nearly didn’t make the tournament having failed to book his RyanAir ticket successfully on the internet (his 14 year old daughter Daisy had successfully booked the entire rest of the squad beforehand) but, talked through intricacies of the Stansted Express, the tube system and the Paddington Express to Heathrow Terminal Five by his wife and daughter, he managed to fly business class to catch up with the rest of the squad in Stockholm. Great banter, vital team manager helping me with the day to day admin/running etc. and generous sponsor of the tour. Oddly decided to perform a bit of DIY Stockholm bridge bungee jumping early Monday morning.

To all those who came, thank you for making it a truly brilliant tour, complete with silverware and another chapter added to the long history of the Old Brightonians RFC. I’d like to dedicate the win and the whole tour in the name of Peter Rumney, we hope we did you proud Peter and continue on this rich vein of form for many years to come.