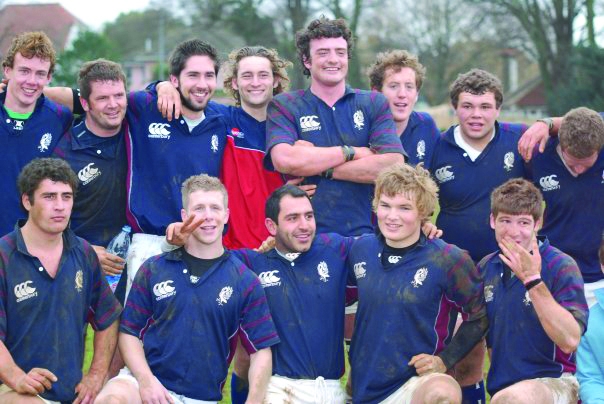 It was a crisp blue December morning that I awoke to on that famous day of the 27th. The sky blue canopy stretched over the farmhouse and melted away into an almost white distance. Scraggy, skeletal looking conifers, stripped of their summer bulk stuck out, dark, jagged and deathly amidst the pure colours above, whilst the ever greens stood rigidly to attention like half cut guardsmen, swaying gently from side to side in the faint north easterly breeze. Two greyish brown rabbits hopped lackadaisically across the lush green paddock below, glinting from the morning glow; I fetched my air rifle.

I was just starting to contemplate what a lovely post Boxing Day morning it was despite having missed two sitters with the gun when a car crackled up the gravel drive and screeched to a halt, out stepped the burley, barrel chested figure of OB’s No.8 Alexander Yeo. He began bellowing like an RSM at changing of the guard for the Baldwins to be down and in his car in 5 minutes or he would disembowel the whole regiment. Knowing Mr Yeo to be a man of his word we scrambled into the Millennium Falcon (his car) like a scene reminiscent of pilots in the Battle of Britain dashing to stationary Spitfires and Hurricanes. By mid morning we were at Hove RFC club house and joined by my motley band of Hooligans, a swarthy band of undergraduates, graduates and masters alike, but all old boys of our illustrious institution, thus we girded our loins and donned battle dress. Alex Broun nearly put on a dress before hooker and pack leader Dan Heal pointed out that it was merely a figure of speech (and despite it complimenting Alex’s earrings and remarkable tan for mid winter, it might look a bit odd), and that incidentally Jamie Aiken wasn’t a figure of speech he was in fact a person.

Having warmed up and run our lineout’s, double dummy scissor pops and blind side number eight pick ups we took to the field against a band of Old Johnonians (Hurspierpoint Old Boys) RFC boys that looked not to dissimilar to a collection of fairytale monsters, we counted at least twenty that could have easily body doubled for Shrek, but with courage in our hearts and my excellent morale boosting speech in our heads we lined up in two silent columns of infantry to commemorate Peter Rumney’s passing just a few months prior. It was a pertinent moment, and you could hear a pin drop around the ground despite a crowd of nearly 400 spectators, here’s to Peter, a legend of not only of the OB but Sussex rugby as well, a good egg and thoroughly descent human being.

The game started at an immense tempo, the tackles flew in harder than I could ever have imagined, hits rattled teeth and blood gushed from open wounds. The Hurst scrum was strong, and they locked horns with the maroon and blues like two hoards of bison, steam rising from the taut bulk muscles of the front three, sinews straining on the athletic back rows. For the first time the OB’s pack, now minus such monsters as Matt Berry and Ben Maidment through sickness and county duty were up against superior fire power up front, yet they held firm. With the battle upfront roaring along, the backs set about picking their lines, co-ordinating daring raids over the turquoise pickets and using skill and finesse to woo the sizable female support on the side lines. James Baldwin, Tom Hird and Will Murrills our flyers looked the very picture of a modern day back three, tall, taut and more like 100 meters sprinters than the stringy ten stone characters of yesteryear. Yet despite their surging, majestic runs and Kamikaze style tackling with the 1st third of play drawing to a close Hurst struck a deserved blow, following a continued amount of pressure in the OB’s 22, they failed to convert the extras, but we went into the second third a try down and needing to make replacements.

The second third was a completely different affair, we camped on the Old Johnian line, Dan Heal, Alex Yeo and Harvey Strudwick battering open holes for the flighty loose forwards of Rupert Baldwin and Chris Canneaux to dazzle with their ball skills (Rupert even putting in a cheeky grubber kick or two). Joe Broun went agonisingly close to touching down before minutes later outside centre Ally Esmaelli, dissecting the line more precisely than an open heart surgeon with his scalpel, glided under the sticks, Tom Hayward adding the extras. The OB’s were clearly in the ascendancy with us dominating our own lineout possession and disrupting most of Hurst’s. Kit Barker was putting a masterful display at fly half, it was clinical, majestic and at some points almost divine in his precision kicking, tactical astuteness and boyish cheek, whilst Tom Aiken, the team’s Saracens RFC star was showing his true international class as the main pivot of all our attacks.

The final third continued much like that of the second, Hurst’s pack melting with their only real dynamism coming from the surging runs of their goliath like lock and nimble outside centre. Yet despite having inserted the scourge of the seven seas Jamie Aiken into the fray making bone crunching wallops and booms, Julian Withers style the Hurst boys stuck a swizz of a try late on. The score board took a turn for the worse, 12 - 7, this was a crisis, in fact if you have a moment this was a twelve story crisis, with marble entrance, large oak doors and a large neon sign outside saying, ‘This is a Crisis’! But like the Desert Rats at Tobruk or the 24th foot at Rorke’s Drift we knew how to battle back from the brink. Myself and Alex Yeo smashed the ball into the enemy’s ranks several times, Dan Heal and James Canneaux using their power to clean men clear off their feet in the rucks, with stealthy hands in the back the ball was whizzed out to the ever announcing Ally Esmaelli, like a rat out of a drain pipe the stocky centre burrowed his way through tackles to touch down in the corner, Dan Silver a kicking supremo very nearly converting the impossible kick out wide.

So the final whistle went, the throngs of supporters melted slowly away into the suburbs of Hove and the OB’s and OJ’s shook hands at 12 - 12, a fitting end to a magic day. Players of special merit were far too frequent, but I would like to say a big thank you to Tom Hayward for stepping in out of position at scrum half, Dan Heal for all the grit and spirit he always shows and a massive show of appreciation to Tom Aiken and Kit Barker who I thought had superb games at 10 and 12. Man of the match is shared between flanker Harvey Strudwick and centre Ally Esmaelli.

Tim Loadsman and John Aiken were again bricks in helping to organise and Alex Yeo was a 1st rate number 8 and vice captain. So finally I would like to dedicate this game and the fine spirit it was played in and the excellent support given by all to Peter Rumney, one of mine, the club’s and rugby’s good friends and most loyal of supporters.

Here’s to you Peter.