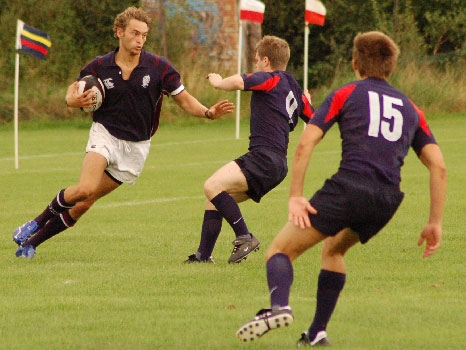 When engaged in the art rugby, the vanquishing of thine enemy can be the warrior's only concern. This is the first and cardinal rule of our game, of our code, of our very brotherhood. Suppress all human emotion and compassion; destroy whoever stands in thy way. This truth lies at the heart of the art of your combat, be it the power of the number eight or the nimble jink of the fly half. Once it is mastered. Thou shall fear no one. Though the devil himself may bar thy way.

With troops draped in maroon and blue battle order, glistening foreheads and a sense of destiny the Old Brightonians took to the field of battle at Motspur Park ready to retake their national trophy for the third time. Their first opponents were Scots; Gordonstoun no less and like Culloden the powerfully armed English drew first blood, quite literally. The bear that is Ben Maidment (R. 2004-06) picked from the base of our scrum and ran over three of the opposition. His sorties up the middle constantly kept the St John’s Ambulance medics busy and many a Scotsman was sent to his doom by our heavy English artillery that day.

We quickly scored from Will Harris (S. 2000-05) the captain and talismanic scrum half showing the strength of an open side to rip open the wilting Gordonstoun picket that guarded their line. More tries followed, Alex Keighley (L. 2002-07) a barrel chested brute picked and went from 10 yards out and he was followed by the athletic lock Rupert Baldwin (S. 2001-06) in the second half whose show and go, despite his frame was as angelic as a scrum half. An Orc like scrum half with gigantism and a face that could have lead an Urukai death squad in Lord of The Rings; but a scrum half style display none the less. Will Harris added another and Joe Broun the team’s flier and one of the finest wingers I have ever seen ran in a try from the half way, his long legs, taut with muscle and purpose stripped all the defenders for pace and he rounded un challenged to dispatch the chaps from across the boarder for once and all. Final score 39 - 0, bravo Brighton!

The next game had us facing Bristol Grammar, a typically southwestern set of boys, strong, hard and fiery. They took first blood when they went crashing over in the second minute, their big winger riding two big hits to go over. The shock was exactly what the likes of Will Harris, Ben Maidment and Joe Broun needed. These three Titans played with such effort and determination, with such heart and vigour that Bristol, a big team, were quite literally smashed to pieces. Tom Hird (A. 2001-06) and Tom Hayward (D. 2002-06) showed excellent composure in both their darting runs and some ferocious tackling in the centre of the park, whilst our other flyer, Will Murrills (R. 2003-05), like so many of his colleagues in the backs, cut the boys from the west in half, his tall, lean physique showing the perfect balance of power and speed throughout all our matches, with long flowing hair he dissected Bristol time and time again.

However, the real hero’s of this game were the forwards. Like wrecking balls our tight five pounded the crimson and blue wall before them. Flankers darted here there and everywhere, giving deft offloads and twenty-yard spin passes alike (open side Chris Canneaux (H. 2001-06) was the master of this). Our lineout was superbly marshalled by Rupert Baldwin and equally matched by the dart like throwing of Lawrence Hewitt a pit - bull terrier of a hooker. The OB’s eventually ran away with the game 29-5 which was actually a tougher lot than the score line suggested.

In the quarterfinal the OB’s met Hampton the winners in 2004. They were a disciplined, swarthy bunch; small and squat in the pack with Wiley fox like backs. The OB’s were stumped for large parts of this game, but like the discombobulated Robbie Rugman (S. 2001-06) , perplexed by the intricacies of the coaching teams hypothesis on unlocking the resolute Hampton defence, the OB’s stuck to their task and eventually overcame it with great heart and exuberance. Once again Will Harris played a crucial role in this, as did the hard yards inside centre Tom Millburn, whom, all day carried and tackled like a true warrior. OB’s running out winners by 17 - 7.

Next came Tonbridge. Without question, Tonbridge and Brighton were the two most complete packages in the tournament, both possessing skilful, free running backs as well as having gargantuan ball playing monsters up front. The encounter started predictably, barrage after barrage of black and white hoops lashed the OB’s, who, after soaking up ten minutes of intense physicality retaliated with the final minutes of the first half spent camped irresistibly on the Tonbridge five-yard line. Then, with barely thirty seconds left on the clock, skipper Will Harris made yet another jinking attack from the back of the ruck to squirm his way in for a Brighton score and bring his personal tally to 6 for the afternoon. Claude Cox (D. 2001-06), team physician and re-hydration officer got to work on sore limbs during the break whilst Tom Howell (A. 2000-02 - backs coach) imparted some valuable advice and I tried to thing of as many catch phrases as I could in one sentence in order to instil that ‘extra ten percent...!’

The second half soon became laboured and heavy, knees buckled, muscles began to cramp up and what had been a lightning quick game, full of ferocity and sparkling with individual talent started to turn weary; that was until the exuberant and highly talented Tonbridge ten intercepted a pass in the middle of the park, he out paced all to slip in neatly under the posts and level the scores at seven a piece. Then with less than a minute left, Tonbridge were awarded a dubious penalty which their ten duly converted and won the game for the boys from Kent.

On reflection, Tonbridge, the eventual winners probably deserved to win the game and were certainly the only team at Motspur who could match us for physicality. Thus we were left without a third cup but nonetheless valiant efforts all round were made. I would like to thank John Aiken (A. 1976-81) and Martin Baldwin for all their help in transporting and organising on the day and also to Alex Bremer (R. 1979-83) for his dedicated photography and support. I must also tip my cap to all those parents who once again showed their tremendous and un-wavering support of the team which was helped admirably by the expert coaching of Tom Howell and Adam Phillips (H. 1998-03).

The whole squad showed considerable courage and skill to once again put the OB’s and the College on the map as one of Britain’s finest rugby establishments.

Here’s to next year.