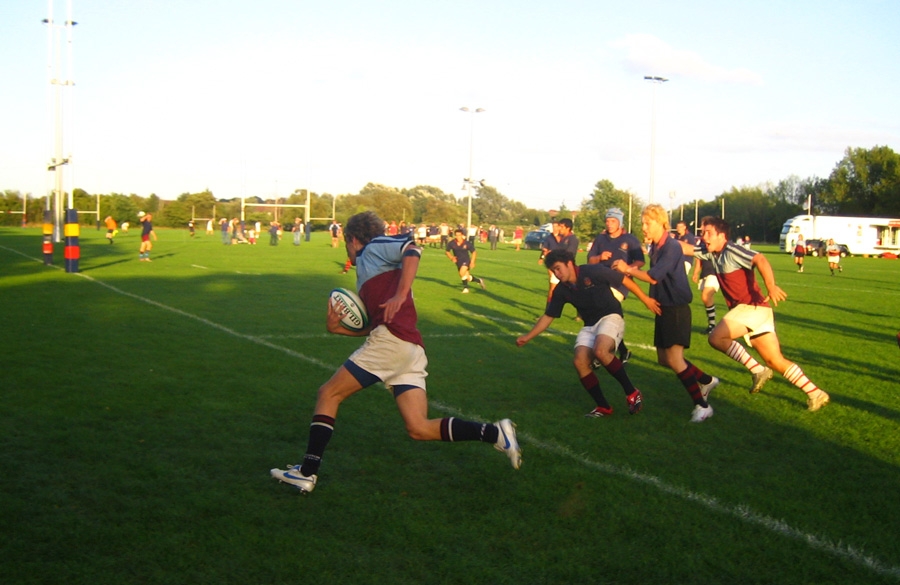 Motspur Park near Wimbledon was the scene for the 10th annual National Cronk-Cunis U21’s Old boys Rugby tournament. Unlike the last two tournaments the sky was an uncharacteristic grey, bruised and heavy with moisture it suppressed overhead like a granite coloured blanket of discontent.

However, nothing could dampen the OB’s spirits and we camped near the RFU mobile museum on the far side of pitch 1 with the usual banter and bravado that we are legendry for. Already there were murmurings that the great maroon and blue machine were here and it started to resonate across the emerald green playing fields, knees started to knock in the opposition camps as blind side flanker and team orc Ben Maidment slipped into his playing shirt his rippling muscles as defined as a prize bull. Meanwhile professional model Will Harris and sleek young men Tom Le Mahute and Rupert Baldwin sent hearts a flutter in the female supporters as they warmed up their impossibly long and lubricous legs. Elsewhere Ken Birnage and Alex Shaw had a cigarette whilst Robbie Rugman got lost on a dangerous and near perilous journey to the club house loos. (Don’t worry he was later recovered and put in several fine performances).

Our first game was against Marlborough, last years semi finalists, and much like last year, despite having some fine backs found the OB’s just too strong for them up front as Ben Maidment and Chris Canneaux displayed some fine ball carrying to blast us through the opening game 12-0. The next game was a good old fashion Sussex style encounter with Christ Hospital Old Boys, they were feisty but soon lost their fire after Tarbo Mabutto and Chris Butt ran in a couple of well worked tries through the centre. Unfortunately our chief naughty feet exponent, Tom le Mahute pulled up with a strained hamstring nevertheless our squad was strong enough to cope with the blow and we rallied in the second half to crash in three more tries, whilst debutant at fly half Tom Hayward put in a delightful, almost poetic performance as the midfield general. Special mention in this match has to go to the squad’s hard men up front Matt Berry, Ken Birnage and the man beast Alex Shaw for their ruthless work in the tight five, as well as Tarbo Mabutto who scored a hatrick.

Next was the quarter final clash with the hosts KCS Wimbledon old boys. The Ob’s blew them away with what I consider to have been their best performance of the day, huge forwards and silky backs combined in a breathtaking ballet of rugby football, orchestrated at nine and ten by Will Harris and Tom Hayward respectively. The sun had pushed its way passed the clouds and peeled back its grey blankets to reveal a deep blue canopy, causing us all to turn a olive brown (actually I went pink but its my article so for the sake of argument we’ll say I looked fantastic). Ben Maidment, Rupert Baldwin and Chris Canneaux carried well, while Alex Shaw was as ever a man mountain in the lineout, indeed he Ken Birnage and Matt Berry were as brutal as ever in this game and like Zulu warriors they effortlessly swept aside any signs of resistance in The KCS pack to win 36-3.

The semi final clash against Portsmouth Grammar was a scrappy and hard fought affair, wings Nick Marshall and Tom Hird acquitted themselves wonderfully, putting in several excellent last minute tackles to thwart the tide of black and red. Meanwhile Kit Dobner and Sam Saville-Barton neither having had a rest all day continued their classy displays in the pack, their hard work allowing a series of monstrous pick and drive moves by our hulking six footers. We squeezed past with an opportunist try by Tom Hayward to advance to the final as 5-0 winners.

The final was played against Oundle, who themselves had knocked out Wellington and Tonbridge on the way. Their pack looked solid and their backs looked more like a pack than their forwards did. We gritted our teeth once again and re-commenced battle. The best way to describe the boys’ performances in final is to liken it to the battle of Waterloo. Like the French, Oundle pressed on in huge blue columns battering our front line defences with barrages of second rows and prop forwards, attempting at every turn to crush us out wide, but like in 1815 we stood as solid as British steel. Our own counter attacks were starting to cause the blues serious headaches and our efforts were rewarded with a superb out-flanking movement as Ken Birnage waltzed in from fifteen yards out on the blindside to dive as elegantly as he was able to under the sticks. First Blood to the OB’s. A clever man would have had a bet on Ken scoring as Ladbrokes and William Hill both had him at 500-1 to score first try and the pit-bull terrier show his exuberance at scoring in the next scrum by demolishing the opposition tight head. Woof!

From then on in it was all one way traffic, Rupert Baldwin and Chris Canneaux continued their ball thieving to present skipper Will Harris the chance to jink his way in and at the half time whistle we lead 14-0. As the second half set in legs became heavy and several substitutions were made on both sides, this paused the OB’s for only a few minutes, as a delicate little break and pass in the middle of the park by Kit Dobner allowed Tarbo Mabutto a forty yard run in, his cheetah like pace too fast for the flagging Oundle. The opposition responded with a late try, the only one to have been scored against the OB’s all day, but more was still to come from the valiant OB’s as right on the death Kit Dobner raced down the left wing to dive over in the corner, an excellent solo effort by the wonderfully talented open side.

Thus as the final whistle blew the OB’s retained their national title, a wonderful achievement and one not to be forgotten, it is indeed a testament to the standard of rugby the college teaches that so many talented and gritty players were available to play for the old boys’ team that day. Already I am aware of the renewed interest in the OB’s from a large majority of recent school leavers and if we can continue our success then it will do wonders for our Association in stoking the fire of desire that burns deep down in any true Brightonian.

Before I sign off I would like to give many thanks to Alex Yeo and Adam Phillips for all their efforts in coaching the squad and helping out even when they were hard pressed for time and also to Claude Cox who made a great chief medical officer in Tom Samandi’s absence. Perhaps the Old Boys’ will see to it that I can employ both of them for next year’s tournament. Congratulations chaps you were a pleasure to coach and you made all of our wonderful supporters proud to be cheering for the maroon and blues. Here’s to making it three in a row next year. Huzzah!