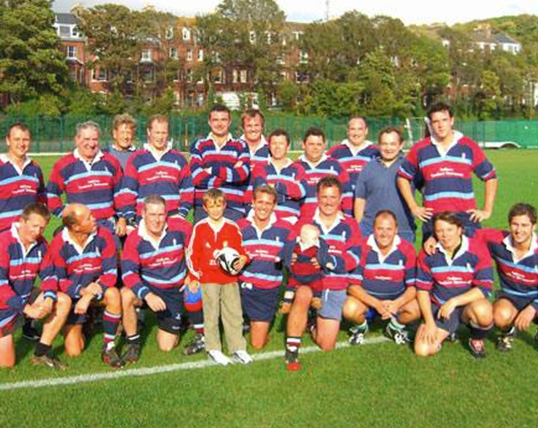 Great start to the season again for the OB Vets RFC. The unbeaten run continues in a game billed as “The Return of a man called Greenfield”.

The first day of October brought us magnificent weather and we assembled early at the home ground mainly as the skipper had informed all and sundry that the game was to start at 2.30pm. However Rumney had organised the referee for 3.00pm. We got off to a fantastic start and Mr. Taylor finished well on the right wing, side stepping his opposite number. The try went unconverted as Dodge had not followed the Johnny Wilkinson school of kicking and was leaning back on impact. All the conversions in the match were taken by forwards because we live on the edge. We built a healthy lead in the first half with some determined runs from midfield. Dougie Edmonds, Paul Atkins and Sam Chetleburg all gained good yardage every time they received the ball. Great foraging from Julian Withers, Dodge, Doddy, ten wickets Ricketts and Junior Bush meant that we were able to maintain 2nd phase possession and prevent Shoreham gaining any momentum. The set piece srummage was rock steady Eddie and this was due to a solid front row which included Robbie Greenfield in his first game for the OB’s for several years. New caps Peter and Liam were useful additions to our squad and we hope they are available for other games this season.

We suffered a loss of form at the start of the second half and allowed Shoreham back into the game with some weak tackling. However when the going gets tough the tough gets going. The pack won a little more ball and by the middle of the second half we had scored enough points to put the game beyond doubt. Dougie Edmonds completed his hat-trick of tries, one converted by Jack Hayes with a drop and the other by Robbie who threatened to reclaim his srum-half birth. Other useful contributions came from Mike Evans, Tony Lewis, Tim Loadsman and Julian’s teacher friend from the college staff whose name I can’t remember.

Thanks to all who played, watched and helped and those who didn’t we know were you live. Not naming any names Mr. Milk bottle legs but you owe us big time. Thanks also to Bushy for sorting the kit. We are a couple of shirts short, please can you return them to John Aitken if they mysteriously turned up in your bags ! Thanks also for Ian at the Wellie for sorting the food and drink.

Watch this space for future games. We need a big squad for the grudge match on 6th January 2006 against Hove. Please make sure that you don’t miss out as we need to keep that run going.