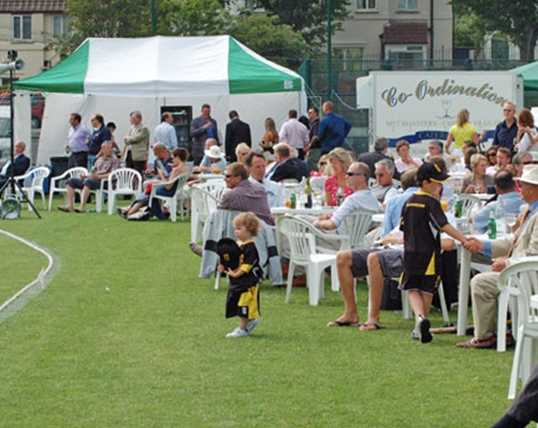 The Lashings XI return to Brighton College in 2007

On 21st June 2007 some of the world's most prolific International cricket stars competed against the college 1st X1 in the 2nd annual Lashings match on the Home Ground on a sun-soaked afternoon. It’s hard to imagine an event that can appeal to, and draw together, the generations of Old Brightonians, College staff, and current pupils in quite the same way that Clare Connor’s (W. 1989-94) annual cricket-fest does so successfully.

This year, the 2nd visit of the Lashings World XI to the College was again the centrepiece of a wonderful day spent on the Home Ground in the company of old and new friends - again blessed by the perfect sunshine that seems to bathe the College so often.

The Home Ground, and indeed the entire campus, looks magnificent on occasions such as this; marquees, gazebos and deckchairs adorned the outfield, populated by folk dressed in their "Summer best" mingling with excited College pupils (autograph books and digital cameras in hand).

The form here is that the lashings side bat first for two hours, flamboyantly setting a target for Joey Appleton’s (D. 1979-84) College side to aim at, and we were treated to the sight of world class cricketers in full flight; enthusiastically dispatching balls to all corners of the field at varying speeds and altitudes (several balls seemed to land on our marquee having collected ice crystals on route) - and giving away their wickets accordingly.

A truly magnificent barbecued lunch was then served, as we were all introduced to the Lashings players and management - and it’s once we’d enjoyed plenty of the liquid refreshment on offer that all present were invited to bid in an open auction for a number of sport-related goodies. As happened last year, Guy Bradshaw (R. 1979-84) and Rob Bourne (R. 1980-85) conspired with Graham Appleton (D. 1953- 57) to bid for Joey to be the "Lashings Player For a Day" - and this time they won! Accordingly, Joey will play for Lashings at next year’s match - reason enough to attend surely?!?

After lunch, the College players had a go at the target - and frankly, got pretty close! Even to my untrained eye it was apparent that there are a number of future stars in the College side; we all know Holly Colvin is destined for great things, and Alistair Wilson and Andrew Thornley batted solidly whilst Charlie Foreman top-scored with 75.

Running into our old masters is always a highlight of these events (even though so many of them hardly seem old at all!). Philip Robinson was on particularly fine form, as was his great comrade-in-arms, Simon Smith. We were delighted to see John Pope, David Lowe and Stephen Radojcic... and most especially for Guy, Adam Belson (R. 1979-84) and I, our dear old (not old) Housemaster, Ollie Smythe. We discovered that Ollie is retiring in the not-too-distant future; God help him if he thinks he can skulk off into the sunset without his former wards giving him a proper send-off!

As always, many, many thanks go to Clare and Joey for another great day out, and to all the College staff for laying on such a great feast.hotos from this event >>

2007 College Sponsors:
Brighton College would like to extend sincere thanks to Overbury Plc for their generous sponsorship of the day.
In 2006 Overbury, the commercial office fit out and refurbishment specialist was voted Britain’s most customer focused company of the year at the National Business Awards, the UK’s business Oscars.
Further information on Overbury can be found at www.overbury.com