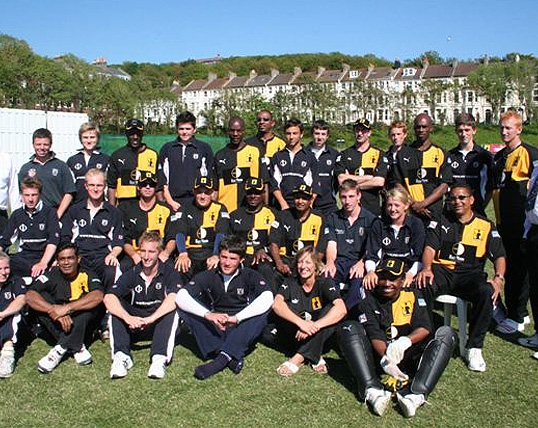 On Thursday 29th June some of the world's most prolific cricketers played against the College 1st XI. Chris Crosbie - a guest of Guy Bradshaw (R. 1979-84) - sends us this report...

Thursday June 29th 2006 is a date that will live long in the memories of many but for the cricketers representing Brighton College, this day is indelibly etched in their minds.

A college match against a visiting XI is an attractive diversion but rarely causes fevered excitement. Unless the visitors are the Lashings World XI. That prospect will have the most taciturn master hurling small boys aside in the race for the most advantageous viewing spot.

Lashings have become part of the fabric of English cricket in a very short time. In 1984 John Steer told David Folb that his planned opponents had pulled out of the following day’s ‘village’ fixture. The ever-resourceful Mr. Folb put together a team that were despatched for 323 yet made a mighty 29 in reply. From these humble beginnings, Lashings grew into the mighty side it is today.

The Lashings side that Brighton College faced on Thursday was as daunting for the players as it was mouth watering for the spectators. The West Indies was represented by Alvin Kallcharran, Richie Richardson, Vasbert Drakes and Phil Simmonds. Henry Olonga and Tatenda Taibu were there from Zimbabwe and the England contingent included Chris Lewis, Phil DeFreitas and Brighton College’s very own Clare Connor. The global nature and class of this XI was confirmed by the presence of South Africa’s Nantie Hayward, New Zealand’s Chris Harris and Greg Blewitt from Australia.

The scene was set, the ground magnificent and even the weather played ball. An azure sky and a blazing sun meant the usual gags about the English Summer were redundant. Brighton College’s 1st XI took to the field (suitably attired for the limited-over game in a natty ensemble provided for by sponsors phusei.com) and acquitted themselves admirably. The fielding was of a very high standard and even though some bloke called Richardson managed a century, Lashings were restricted to a mere 255 from their 35 overs.

Lunch was taken between innings and was as entertaining as the cricket. There were the traditional speeches and appalling jokes, some of the latter were so bad that they’ve been procured by the MOD for use in Afghanistan. The College’s First Lady of Cricket, Clare Connor, then made a presentation to John Spencer, affectionately known as ‘Coach’. 25 years of corralling reticent youths deserves a VC at the very least but ‘Coach’ seemed suitably pleased with his trophy. The respect and affection shown by his colleagues and the assembled Alumni may represent the true influence that this remarkable man has on College life for a quarter of a century. May his retirement be as enjoyable as it is deserved.

Henry Olonga then took the stage to entertain the crowd with a bit of a singsong. Normally when a sportsman sings, the venue is a bar, the content bawdy and the vocal skills questionable. Fortunately, Mr. Olonga is a singer of some considerable talent and his rendition of "You Raise Me Up" was warmly received. He then had to go and annoy everyone by performing a breathtaking version of "Nessum Dorma". Being extremely handsome OR a fabulous cricketer OR a talented artist OR a great vocalist is enough to inspire envy. However, to be all of those things is just plain greedy. Mr Guy Bradshaw was kind enough to explain that he was also an absolutely charming lunch guest. Sickening really.

The Lashings players all took a bow and as each one was introduced to the crowd, their career statistics were read out - just in case the College 1st XI were harbouring any thoughts that they could actually win this match. There was an auction of some fabulous sporting memorabilia raising a healthy sum for charity. It served to remind everyone just how much Lashings has done for charitable causes and it was pleasing to see David Folb in attendance to receive warm applause for hard work and generosity.

The College 1st XI took the field after lunch and amassed a highly creditable 152 before the last wicket fell with just a few balls to spare. The batting highlight was the half century of Matthew Machan (S.) who was named the man of the match.

Lashings may have won the game but this was a triumph for Brighton College. The day was a delight, the kind of day that reminded the older spectators that those perfect summer memories were not just figments of their imaginations. The only possible improvement would have been for Lashings to field a player called "Ginger" Beer.

One can only hope that this will become an annual event. If Clare Connor has anything to do with it, you’d be a brave man to bet against her. After all, she's not known for her lack of determination and if you want to know where that comes from you'll have to talk to "Coach".