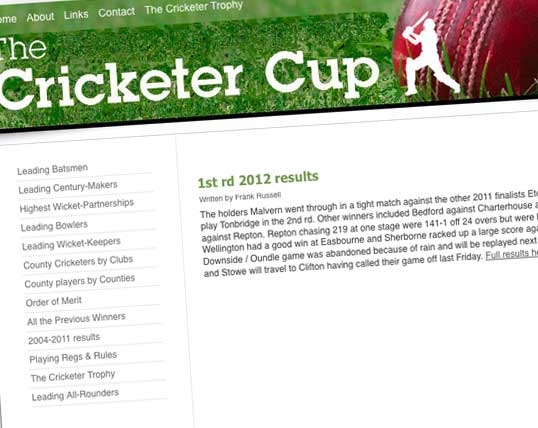 In a season during which sunshine has been a rarity, it shone on the Home Ground for the first round of the Cricketer Cup. Electing to bat on a sound but slow wicket the Old Brightonians made a promising start with Adam Davies (18) and Alisdair Wilson (24) batting with comparative comfort against steady medium pace bowling from Tonbridge.

However, with the score on 35 for 0 off only seven overs, Davies and Andrew Thornley were bowled off consecutive balls. Patrick Spencer and Wilson followed soon after and the Old Brightonians never fully recovered.  A battling 32 not out by Elliott Cloy provided important resistance and brought the total close to respectability.

However, 131 was never going to be enough against one of the strongest batting teams in the competition and sure enough the Tonbridge top order set about our bowlers with some relish, quickly showing that the demons in the pitch that had appeared when we were batting were a mere fancy. A second wicket partnership of 84 in quick time put paid to any chance the home side had. Julian Barr and Alisdair Wilson bowled well at the end, taking between them three of the four wickets which fell, but Tonbridge ended the game deserving winners by six wickets.