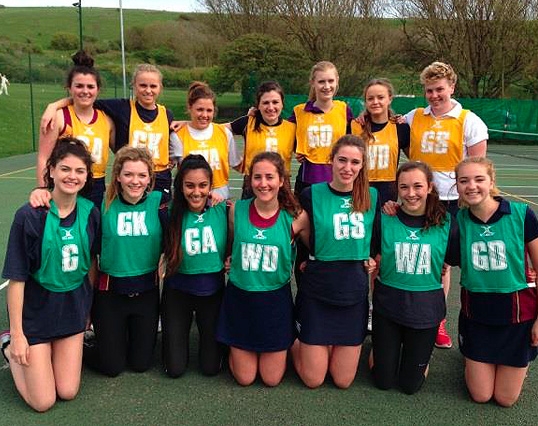 As part of our celebrations of 40 years of Co-Ed on Saturday, a group of Old Brightonians returned to the netball court and rounders pitch to challenge the "Newbies" in a friendly competition.

In the first match, the current girls (who were all 1st team or Under 16A netball players) showed their style and won 17-15. Caroline Jeffrey (Wi. 2008-2013) and Anna Surridge (Wi. 2011-2013) were the most recent leavers, showing their skills on the court and leading the way for the visiting team. Izi Noakes (Wi. 2007-2012) played her memorable relaxed style of netball, popping the goals in with minimum effort, although the court was a little alien to her as she is now very focused on her cricket at Loughborough. Sofie Cawley (Wi. 2009-2011) was fast on the court and her enthusiasm for the game shone through, particularly as she has recently started playing University netball (also at Loughborough). Lauren Palmer (Wi. 2006-2011) enjoyed being a player rather than coach on this occasion as she is now working in the prep school and has not strayed far since leaving the College.

On the rounders pitch, the cricketing skills of the OBs came to the fore and the "Newbies" were beaten convincingly. Izi used her power to hit the ball too far to return, while Caroline Jeffrey ran too fast around the posts to prevent her from racking up the points. It was great to see the girls again and hear their tales from life after Brighton, while also seeing the standard of our current Brighton girls - the future looks very promising.