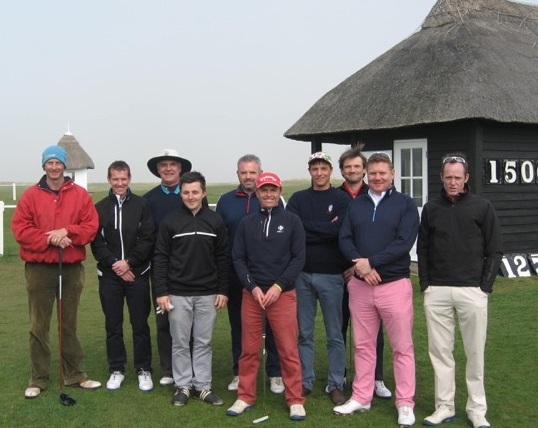 REPORT: OBs at the Halford Hewitt

The Old Brightonian Golf Society made their annual pilgrimage down to Sandwich in April for the Festival of Foursomes that is the Halford Hewitt. Early confidence in the team was rocked by the unfortunate withdrawal of reinstated pro Michael Mudie (Ha. 1998-2001) due to work commitments. However this was viewed as the strongest squad we had assembled for many years and there was a sense that we might be able to pull off a shock by beating last year’s champions Merchiston.

The first practice round at Sandwich took place on Tuesday 7th April in glorious early Spring Sunshine. Captain Geoffrey Bush (Ha. 1965-70) gave early indications of his tactical brilliance with some well thought out pairings and everyone seemed to be in good form. 36 holes of golf at an Open Championship course was excellent practice and left the team hungry for the first curry of the trip. (Our lodgings were formerly a pub with rooms that has now been transformed in to an Indian restaurant with rooms!!)

Wednesday 8th April dawned glorious again and now the serious practice began with a morning tee time for 3 pairs and afternoon time for the remaining 3 pairs. Places were up for grabs and our esteemed captain kept a close eye on form and who seemed to be playing well in partnership. In the afternoon matches the formidable Gates/Hunt pairing played their best golf of the Hewitt to shoot 71, mutterings were that they may have peaked too soon.

The team and running order was announced that night after our second curry and was as follows:

A relatively sober evening was completed and the team slept well, looking forward to the 3 o’clock match the next day.

Thursday 9th April brought more beautiful weather, however when the team arrived at Sandwich a Sea Fret (or in the Scottish vernacular a Haar) had begun to appear. The match started in a light mist with the hope that we would get all games completed before the Haar/Fret made conditions dangerous and unplayable.

In fact the Haar/Fret did gradually worsen but not before Pett Snr and Tate succumbed 6 and 5 to a very strong Merchiston number 1 pair. With 4 matches still on the course the hooter sounded (or would have done if it hadn’t been broken) and play was suspended. At this stage the match was very much in the balance with 2 matches in our favour, one all square and one where Merchiston were leading 1 up. Retiring to our inn was the only option and a hat trick of curry was achieved by many of the team. Some of the lesser mortals pleaded with the waiter to provide something else and thankfully he obliged.

So our heroes retired to bed on the Thursday night still involved in the main event which has not happened for some time. Players dreamt of the shots they were faced with the next morning. Thankfully the Fret/Haar lifted over night to allow us to complete our matches at 9 am on Friday 10th April.

Our strongest pairing of Roberts and Ainsworth won their game with a scintillating run of birdies and Sweet and Budd played brilliantly to win their game. Hunt and Gates were unlucky to come up against a very strong Merchiston pair and were narrowly beaten. This left the new pairing of Hitches and Pett Jnr going down the last with the match tied 2-2.

Merchiston holed a miraculous 15 foot putt on the 18th green to take the victory and prevent the game going to extra holes. A valiant effort by the whole team gave the defending champions a real fright and the boys were rightly proud of their efforts.

It was too early to drown our sorrows in the appropriate fashion, so Captain Bush set about devising a cunning plan to give the team the best chance of success in the Plate competition which is staged at the adjoining Princes Golf Club. 6 good men and true were chosen; Hunt and Gates, Sweet and Tate and Roberts and Ainsworth.

We won our first and second round plate matches on Friday and Saturday with wins for both Ainsworth and Roberts and Sweet and Tate. This set up a quarter final against a top class Epsom team. The team put up a strong fight and all the matches were close, however Epsom took the victory 3-0 to leave our weary heroes with a long journey home on Saturday evening.

So in summary, a really good showing by the Old Brightonian squad. Perhaps more importantly there is real optimism for the future with some excellent youngsters coming through and the building of a strong team ethic.

The Halford Hewitt is a real privilege to play in and it is fantastic to have healthy completion for places. I would urge all keen golfers to practice really hard and make themselves available for April next year. As well as being serious golf it is also really good fun and gives people a wonderful opportunity to play three fantastic courses in the company of old school mates.