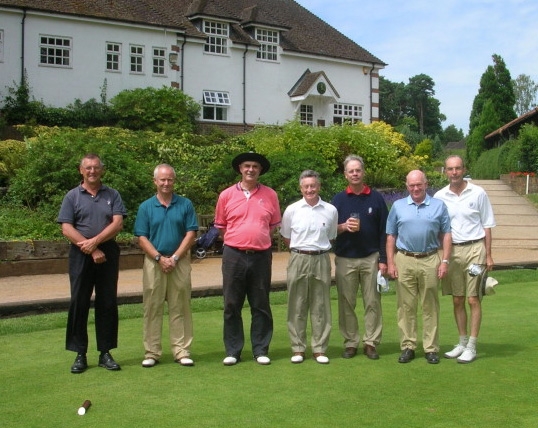 The Cyril Gray tournament is a scratch foursomes School team event for over-50s with 32 schools playing and 6 players making up each team. Owing to there being a good chance of 36 holes having to be played on one day, it is desirable to have a squad of players. This year we went into the main event with a group of seven players, ably supported by Watson Failes who lives nearby and was able to play if needed. Watson turns out to be our secret weapon for the Super Seniors event on Saturday 27th June which requires two golfers with a combined age of 140, with both being over 65.

Practice day was the Wednesday before, and four of us took advantage of this - a useful experience to become acquainted with Worplesdon’s greens which are notoriously quite fast. As the weather had been dry, then the greens deserved a deft touch particularly if any putt was downhill.

Our first round match was against Glenalmond. Brighton did not see this draw and instinctively think we were the bookies' favourites; quite the opposite. The opposition seemed to have a reputation of strength and depth. A close battle ensued. Our 1st pair of Chris and Geoffrey had a battle but came off second best; our 2nd and 3rd pairs were Adrian Wood and Warwick, and Nigel and Robin. These last two matches both went the distance and more, and in the first of many nailbiters that were to characterise our event this year, Brighton won both on the 19th! We had beaten Glenalmond! This Round 1 win enabled us to enjoy a glass or two rather than to have to go out again late in the day for the first round Plate event match. Glenalmond were to go on and show their strength by winning the subsequent Plate event.

Our second round match on Friday at 10am was against Edinburgh Academy. Brighton have had matches against them in the past, particularly in the Halford Hewitt, and some of our current CG team recalled some memorable encounters. Edinburgh presented a team with an average age much closer to 50 than Brighton’s, whose average age is close to 65. This can be a disadvantage apart from when experience is needed in making knee-trembling putts on the 18th green. Our 1st and 3rd pairs were the same as on Day 1 and both their matches went down the 18th all square, with Brighton on each occasion winning! One of Chris’ opponents was the same as in his memorable victory with Martin Sabey at the 21st hole at Sandwich in 1995! Our 2nd pair in this match was the two Adrians who lost their match only on the 16th against a pair with significantly lower handicaps. So Brighton were now in the quarter finals! That required a further 18 hole match starting later that afternoon, but at least allowing time for lunch!

We brought Warwick back into the 2nd pair for the afternoon. Another very close game ensued with all matches going through all 18 holes. First pair of Chris and Geoffrey just came up second best, losing 1 down. Their golf on the day was without a score being higher than a 5 on any hole – very steady, but their Rossall opponents played the back nine in 1 under par. Our 2nd Pair of Adrian Wood and Warwick were 2 down after 16 but made two good pars to win 17 and 18 and take the match onto the 19th. Regrettably such scoring was not continued and a concession to a likely winning par was made. The 3rd pair were already on the 19th tee ready to battle on but as the match result was now 2-0, that match was agreed as halved. Rossall then went onto the Final where they came up losing to Watsons.

It was a most exciting two days in the main tournament and Brighton held their heads up high after three close matches and results against teams with lower ages and lower handicaps. This just goes to show that there is more to foursomes than statistics and reputation.

The Super Seniors event on Saturday is just one pair representing the school and we fielded Watson and Warwick. This is played as a Stableford but off scratch, which is pretty tough, and so scoring would not be expected to be anything like 36 points (which would be achieved in stableford if handicaps were taken into account and played to). A good first 12 holes suggested that a score of over 30 might be possible but slight faltering at holes 13/14/15 meant the total they achieved was 28, a good score which earned 2nd place. The winners made just one point more and won their pint tankards, whilst Brighton’s pair add a second half pint tankard to mirror what they achieved in 2013. Well done Watson and Warwick!

The Cyril Gray was played in a great spirit on a delightful course in great weather. If there are OB’s reading this who may wish to be considered for the tournament, then please let Julian (Golf Secretary to OB’s) or Adrian Wood (CG team admin) know.