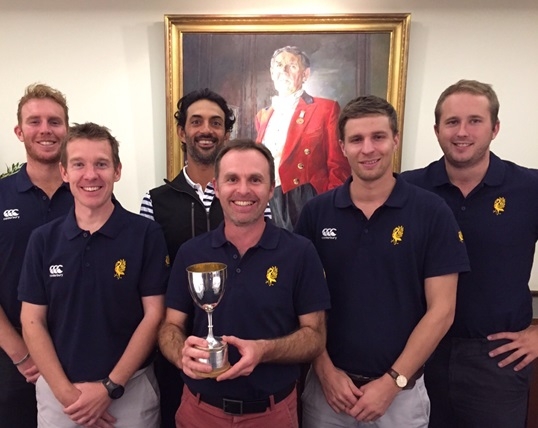 Old Brightonians are delighted to report an emphatic victory in the Sussex Cup held at Walton Heath on Sunday 30th August. In the annual quadrangular fixture against Hurst, Lancing & Eastbourne the OB’s recorded 11 points out of 12, with 5 wins, a half and no losses.

OB’s assembled a strong team as preparation for the forthcoming Grafton Morrish Finals being held in Norfolk at the end of September.

First up in the morning were Riaz Rattansi (Ch. 1985-90) & Mark Budd (Du. 2004-09) against a Hurst pair. Once more Mark followed orders and left his driver in the car, drove straight and only out hit his opponent by 40yards or so. Riaz took care of the rest and the result was a 4 and 2 win.

Second out were the evergreen pairing of Roly Ainsworth (Du. 1992-97) & Jules Hunt (Du. 1984-87), playing Lancing. Quickly out of the traps BC were up the entire match and looked at various occasions as if they were to going to put the match out of reach until a Lancing fightback saw them draw level on the 17th. Our drive on 18 found a divot but Roly was not fazed and duly fizzed his wedge shot 10 yards past the hole and then, joy of joys screwed it back to a foot from the pin for a gimme. Lancing failed in their birdie attempt and the match was won by a bit of Roly magic.

Third pair was Michael Mudie (Ha. 1998-2001) & Freddie Pett (Ha. 1999-2004). With prodigious distance but variable radar their game against Lancing was tight at the turn. Michael & Freddie then played immaculate golf on the inward stretch, winning 4 of the last 7 holes to win on the 17th.

OB’s then adjourned to the Ryder Cup room for an enormous lunch – such a big lunch in fact that Mark split his trousers, presumably to give him some much needed space down there…..

Riaz teamed up with Michael in the afternoon to make a formidable pairing. Hurst’s first pair had no answer to such pure ball striking and succumbed 4/3. Roly & Jules played Eastbourne and some outrageous chips and putts kept them in the game early doors before they broke away to win 3/2. Mark & Freddie really got to explore the heather and some interesting angles into the greens and were 3 down after 12 against Eastbourne. However a sterling comeback saw BC win the last hole to force a very creditable half.

Brighton, late entrants to this great tournament have now recorded 3 wins in the past 4 years. Lancing, Eastbourne & Hurst also have 3 wins so there will be a little extra riding on next year’s event!

Brighton head to the Grafton Morrish Finals in high spirits albeit with the hugely difficult assignment of beating KCS Wimbledon , one of the pre-tournament favourites.…were we to win we then play Charterhouse or Eton!!