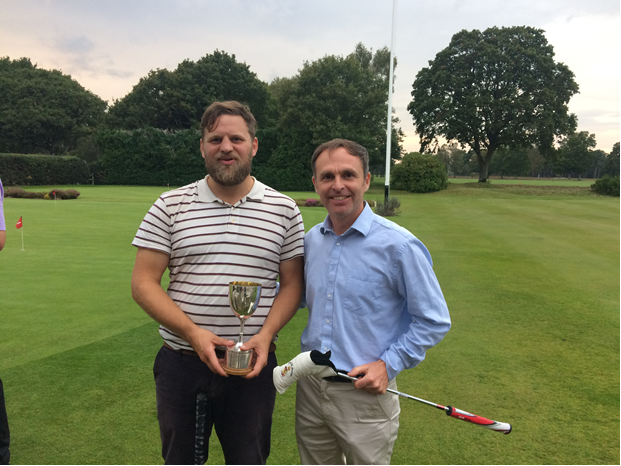 Old Brightonians tied with Lancing in the Sussex Cup

In the annual quadrangular fixture against Hurst, Lancing and Eastbourne the OB’s recorded 8 points out of 12, with 3 wins, 2 halves and 1 loss.

In the morning session the pairings of both Roland Ainsworth (Du. 1992-97) and Elliot Cloy (Al. 2002-5), Jules Hunt (Du. 1984-87) and Ben Roberts (Al. 2009-11) recorded victories against Lancing’s first and second pairs. It was to transpire that these would be the only losses of the day recorded against Lancing. At third pair Michael Mudie (Ha. 1998-01) and Freddie Pett (Ha.1999-04) visited a little too much heather, did not receive the rub of the green and succumbed to a Hurst pair. We took lunch sharing first place with Hurst.

In the afternoon Freddie was paired with Elliot and, after a really good battle with Hurst the spoils were shared on 18. In match two Michael and Roly were pitted against Eastbourne’s top pair and were down for much of the match and headed to the 18th one down. A perfectly played final hole however was enough to overcome the deficit and secure a win and to halve the match on 18. Jules and Ben then followed behind on 18 after having pulled back a two hole deficit to reach the last even. A solidly played hole whilst Eastbourne ventured into the heather gave victory to Brighton.

Brighton were first in the Clubhouse and it looked odds on for Brighton to take the Cup. Lancing however won all their afternoon matches against Eastbourne and Hurst to level us on points. Tradition dictated a putt-off, last occurring in 2015 when Brighton beat Hurst.

All assembled on the practise green to watch team Captains Jules Hunt and Ross Gilbert go head-to-head. After 5 holes the Schools could not be separated although one putt from Brighton had defied gravity in failing to drop.  At the 6th Brighton’s 20ft putt fell agonisingly short and Lancing’s captain then applied the killer blow to take victory for his team.

All in all a fine effort from Brighton and an excellent day and it is great to be part of an event where there is such warmth and good spirit between the local  schools.