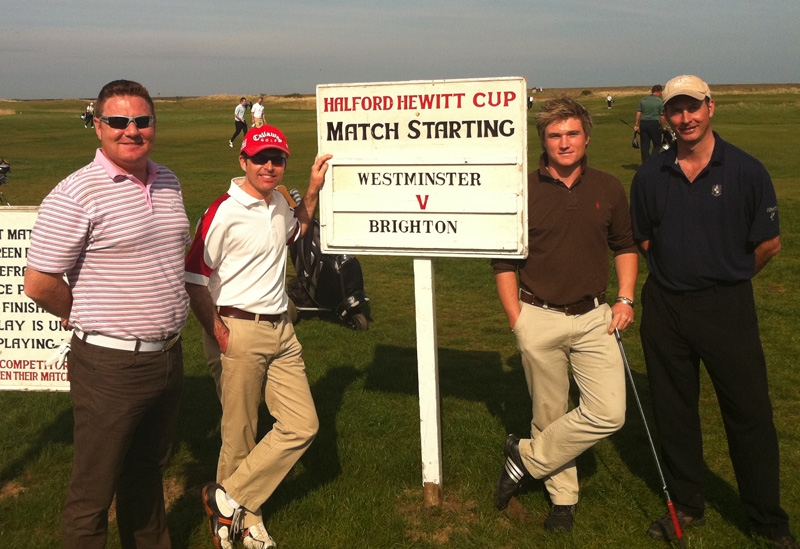 Arguably the strongest OB team ever assembled were in boisterous spirits during the practice days. There were strong grounds for optimism that we would win our first round for many a year.

In glorious late afternoon sunshine, we commenced our battle against Westminster. First out was the pairing of Chris Long (D. 1984-89) and Mark Budd (D. 2004-09). A schoolmaster employed to reign in the prodigious talent and hitting of Mark Budd. Mark’s 350 yard carry over a rise to give a wedge in for his partner on the par 5 3rd became a talking point which ran from the course and into the Clubhouse. Alas after a good battle against a strong team Chris and Mark succumbed on the 18th. Second out was our dream pair of Riaz Rattansi (C. 1985-90) and Andy Sweet (D. 1986-91). Clever (lucky) Westminster put out their weakest pair and our best team was wasted in a 6&5 victory. The key battle came at third pair which involved the pairing of Julian Tate (D. 1982-87) and Patrick Spencer (R. 1994-99). One of the Westminster’s team had to be pulled in at the last minute to cover an injury. It was Julian who looked rushed on the first tee however as he struck his drive high and proud into a poor unsuspecting Golf GTI parked in the Clubhouse. Great merriment erupted from the balcony as everyone realised that Brighton College had arrived! Julian and Pat recovered their poise but despite being better golfers could not prevent a 3&1 loss as Westminster putted everything in sight. Putting wins matches. At third pair Julian Hunt (D. 1984-87) took the budding professional Tom Hayward (D. 2002-06) under his wing and enjoyed the slip stream of Tom’s excellence. Showing resilience Julian and Tom came back from 3 down to win 3&1. Everything came down to the last match which paired Chris Pett (H. 1962-67) and Chris Gates (R. 1985-90) against one of Westminster’s strongest pairs. The Chris’ did exceptionally well to bring the game down to the 18th and a big crowd gathered. Unfortunately Brighton’s second shot fell to a watery grave and with it the match was lost and Westminster prevailed 3&2.

Thus it was into the Plate competition again, this time against the might of Whitgift who had won the event on the previous occasion that they had participated. A very strong team was made to sweat for their victory with our third pair of Andy Sweet and Patrick Spencer going down first on the 18th. The second pair’s match comprising Julian Tate and Mark Budd was eventually settled by a Whitgift birdie on the 20th. The first match comprising Julian Hunt and Tom Hayward was still going down the 21st when news of Brighton’s loss came and a sporting half was taken.

Brighton may have lost but both in the main competition and the Plate there were titanic struggles and on each occasion the loss was desperately close. It is fair to announce that Brighton are ready to become a force to be reckoned with if we can keep our youth and take a few more of the stars who will shortly be leaving the College.

The Halford Hewitt week was however completed with success from an unexpected quarter. Four of those who were not selected for the Plate team descended upon Littlestone for a satellite tournament, the Kenyon Bowl at Littlestone. By amassing a magnificent 41 points, Geoffrey Bush (H. 1965-70) and Warwick Sabey (B. 1959-65) won the Kenyon Bowl for Brighton College. Very well done to them.

Join us... OBGS are blessed with the opportunity of playing various other outstanding tournaments throughout the year. Very few of us played golf at school but have since taken to golf and we are always on the lookout for further recruits to our Society. Please feel free to contact Julian Hunt (D. 1984-87) at This email address is being protected from spambots. You need JavaScript enabled to view it..