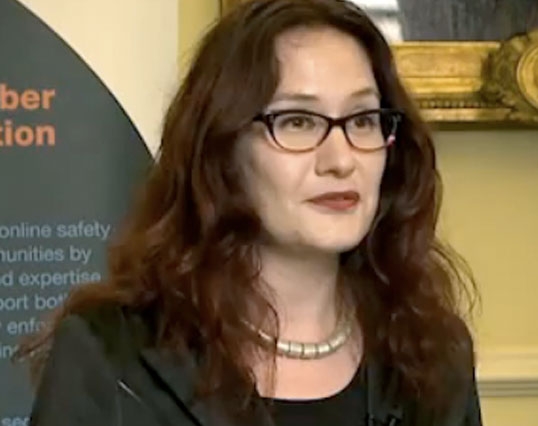 Head of School 1995, Victoria Baines went on to study Classics at Trinity College, Oxford and gained a PhD University of Nottingham. She is now a Strategic Advisor at Europol, specialising in cybercrime, and has also managed to somehow find the time to record a CD of folk songs, which is due to be released later this year.

An actor or a lecturer. My colleagues would doubtless tell you that I have realised both of these ambitions.

I'm Head of Cybercrime Strategy & Prevention for EUROPOL, the European police agency, in The Hague.

There really are too many to choose from. The best would include being in Mr Smith's productions of My Fair Lady and As You Like It, the sesquicentennial celebrations in 1995, teachers' dogs (Sean, Finn and Darcy among them), and getting away with a lot because people assumed I was so well behaved...

Never attempt to get out of the cross country by fabricating a congenital heart condition.

I spent five years at Oxford reading Classics, then went on to do a PhD in Roman Satire and teach at Nottingham. After the doctorate I fancied a change, so I became an intelligence analyst in the police. It sounds like an odd move, but my granddad was a police officer, and the day to day work is quite similar – I take stuff apart, make sense of it, and tell people what I've found. The difference is I now do it with crime data, not Latin hexameters.

I manage a small team that analyses threats from online crime in the European Union. Based on that insight we develop measures to combat and prevent cybercrime, online fraud and child exploitation, and support the 27 EU Member States in implementing them. We're constantly scanning for technological innovations that can be misused by criminals, and we've just produced scenarios on cybercrime in 2020 which people seem to be quite enthusiastic about.

27 countries means as many different ways of doing things, so it can often be a challenge to achieve consensus. I also have something of a hybrid role which straddles the policing, political and academic communities. Solving problems by taking the best from each of these approaches is really exciting, but it means there's always someone who needs to be convinced!

I've helped to put away some pretty nasty criminals, including prolific and persistent child abusers. I'm certainly proud of that, but most of all I feel privileged to have worked with some extraordinary people who have dedicated their lives to protecting the public.

Away from the office I've started singing again and am due to release a CD of folk songs this year. A couple of years ago I was lucky enough to be coached by one of my idols, Shirley Collins. I remember thinking that if I got run over by a bus on the way home I would die very happy!

I'd quite like my career and personal life to be in the same country some time soon! My family and partner are still in the UK, and at opposite ends of the country. International travel is a chore when everything goes to plan, but a complete nightmare when it doesn't.

− The complete works of Knut Hamsun. He's an early 20th century Norwegian novelist, and his characters are so vivid that I would never be lonely.

− A digital voice recorder (solar powered), so that I could make my own music

As a smart arse with a conscience and the odd hidden talent.