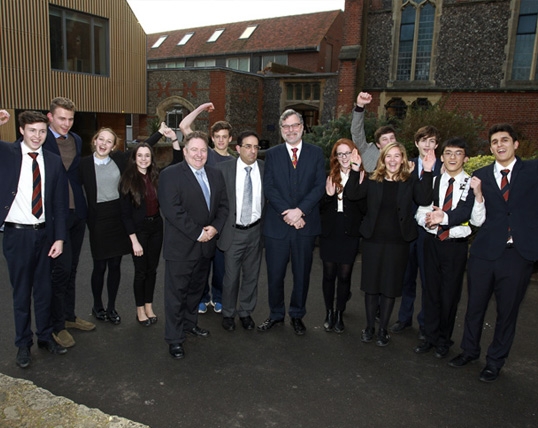 Head's, Abraham and Williams are the winners of the Brighton College Entrepreneurship Programme 2013

The stage was set, the 'dragons' were seated and the cameras were rolling. The seven finalists waited nervously for the chance to present their ideas to the judges and to the assembled L5th, U5th and L6th pupils.

Having battled through stiff competition the previous week in the heats, they knew that it was not going to be easy to reach the final three and claim the investment money. First up was Williams, to present their idea of a web portal for pupils providing news and reviews on college life. Next were Seldon, aiming to fill a gap in the market for one- stop hair care, with the RushBrush - a brush housing dry shampoo.

New followed with a very slick presentation on the Spike Shield, a credit card-sized test for drugs in alcoholic drinks, then Head's, with their charity up-cycling not-for-profit business, aGain. Next up to the stage were School, with Firefly, a lighting system integral to the lining of bags and rucksacks, along with a fully working prototype. Ryle presented their device for one pot cooking, saving on space and washing up, complete with a persuasive advert, and last but not least were Abraham, presenting UtiLite, a lightweight cycling harness for the extreme cyclist.

The judges' questions were met with well-considered answers and it was clear that all teams had a thorough knowledge of all aspects of their businesses. Although the judges recognised merit in all seven ideas, they came to a consensus and chose Head's, Abraham and Williams as the winners of the £10,000.