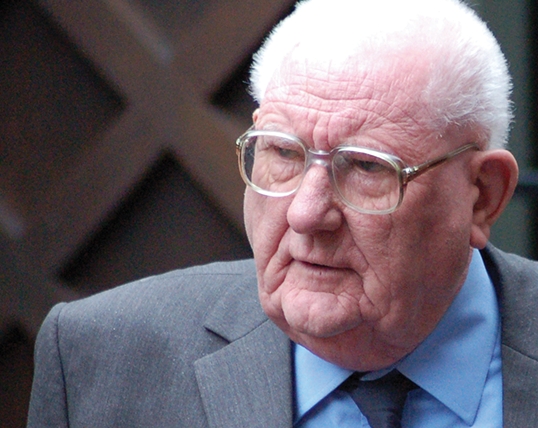 William "Bill" Blackshaw, Headmaster at Brighton College from 1971-87, has died

Bill Blackshaw, who was Headmaster of the college from 1971 to 1987 died peacefully at home in Rottingdean on Friday 27 May. He had a huge impact on the school during his 16 years of headship, increasing numbers markedly, introducing co-education in the Sixth Form and overseeing the greatest building programme of the post-war era.

He arrived with Elizabeth and the children from Repton, where he had taught modern languages for 16 years and been a housemaster. Much was required to be done in his early years at Brighton, both in reinforcing the disciplinary framework, which had loosened somewhat during the so-called liberal 60s, and significantly enhancing the quality of teaching by employing some younger staff to join a predominantly middle-aged Common Room.

​His first building project was to erect the Sports Hall, made possible by money he raised himself, thereby confounding the governors' gloomy protests of penury. Then came the classroom block on the west side of the Home Ground, which also provided a home for the growing Pre-Prep; and finally the Lester Building for Maths and Computing. 'Bill the Builder' was indeed a legitimate soubriquet.

A talented watercolorist himself, he was a champion of the visual arts in the school. The establishment of the Burstow Gallery, in the foyer of the Great Hall (an idea met with some scepticism by his governors), provided a space for a succession of highly successful exhibitions by notable artists. The Picasso and the Theatre exhibition in 1982, which took over the Hall, received acclaim in the national press and was one of the ways in which the school became more known in the wider world under his leadership. His eye for visual impact and character traits had also found expression two years previously with his memorable production of Chekhov's The Cherry Orchard.

Cricket was an abiding passion. He had played for the Royal Navy during his National Service and run the cricket at Repton with distinction. He was naturally keen to maintain Brighton's strong record, both at schoolboy and Old Brightonian level. The annual Sunday 1st XI fixture vs the Headmaster's XI (always timed to allow the players to attend chapel first) was quite an event, both sporting and social.

Bill and Elizabeth lived the life of the school and made the school their home. They enjoyed living in close proximity to a house full of boys, even hearing them kneeling for house prayers in the junior dormitory as they entertained guests for dinner in the dining room below. They retired to Squash Court in Rottingdean where they were as generous hosts as they had been in the college. Bill's experience of headship made him a valuable governor in 5 schools; he continued to paint, of course, and regularly exhibit; he was a regular attender at St Bartholomew's; and he wrote two books, a history of Bilton Grange (his own prep school) and a history of the Cryptics Cricket Club.

The college has lost a great Headmaster and a most charming man. We extend our sympathy to Elizabeth, Jimmy and Ellie.

We've received some really lovely tributes and messages since we announce Bill's passing - thank you. Below is a selection of them and we invite all of you who'd like to leave your thoughts in the comments section on the right, or write to Rebecca Findlay at This email address is being protected from spambots. You need JavaScript enabled to view it..

"I had the privilege of working at Brighton College during Mr Blackshaw's tenure of service. He was a very dedicated Headmaster and much loved."
Vicki Rodriguez (past staff - Brighton College Common Room)

"He was a great man - headmaster, he was the one who got me to the next stage in life, and gave me the belief and courage to move forward."
Jane Haviland (Fenwick 1979-81)

"I’m very sorry to hear the sad news of Bill’s death. He was a lovely man and an excellent Headmaster. I remember him fondly and would wish my sympathies to be passed on to his family."
David Adams (Aldrich 1967-72)

"My sincere and heartfelt condolences over the death of Mr. Blackshaw. Our thoughts are with the family."
Abdullahi Yusuf (School 1986-87)

"I was so sad to read your notice about Bill Blackshaw. We “headmastered” together for nine years in the 1970s and had a most happy relationship; I was so pleased to see the developments in the College during this period. I treasure particularly two water-colours which he did: one of the College front quad, as seen from our bedroom window in Walpole Lodge which he did for us a s a leaving present, and the other of the old cricket pavilion which sadly had to go when the new block was built on the west side of the Home Ground."
Gordon Smith (Bristol 1946-52)

"This is very sad news and my thoughts and sympathy go to Elizabeth, Ellie and family. I will always be truly grateful to Bill for his enthusiasm in supporting my early skills in watercolour painting and Fine Art. Bill was instrumental in developing my early confidence as an artist and art teacher for which I will always be grateful."
David Grigor (Leconfield 1982-87)

"I was very sad to receive the news of Bill's death. He was a huge influence on me during my time at Brighton College and subsequently. We arrived at the College in the same year. He was headmaster throughout my time at the College and I had the great honour of serving as his Head-boy in my final year. He appointed me as the first non-Christian head of school in the face of considerable opposition and this endorsement meant a huge amount to me then and throughout my life.He was a warm, kind and inspirational man who made one feel that he had a genuine interest in one's wellbeing and development. I feel a great debt of gratitude to him. I also have very fond memories of taking cookery lessons with Elizabeth and being welcomed into their home. I will always remember Bill as a wonderful teacher and role model."
Prof William Rosenberg (Hampden 1971-76)

"Very saddened to hear this news and no doubt details of Bill’s funeral will be announced once they are known."
John Polsue (Bristol 1965-69)

"That, indeed is sad news. Mr Blackshaw, was a great teacher. He suffered us in Art Appreciation, felt the cane but thought highly of this great man! He will be hugely missed."
Matt Walters (Durnford 1977-80)

"He was a man of true stature in every meaning of the word, and the College owes him a huge debt of gratitude. He meant a great deal to me and he played a major role in developing my career. I learnt so much working with him when I was Head of English and Drama from 1972-76, and I greatly valued his support and advice."
John Gfiffin (Brighton College Common Room – retired Head of English)

"I admired Bill as Head Master of Brighton College and as a chap – he was the epitome of an educated English gentleman of his era – refined, cultured, courteous and with a powerful presence and good sense of humour. I have been lucky to chat to him now again on the ‘phone and it was always a pleasure. "
David Sinclair (Aldrich 1979-83)

Bill's funeral was held onTuesday 21st June at St Bartholomew's Church followed by a reception at the College in the Sarah Abraham Recital Hall in Brighton College.

Anyone wishing to send a donation in memory of Bill should make a donation to the family's chosen charity Médecins Sans Frontières.