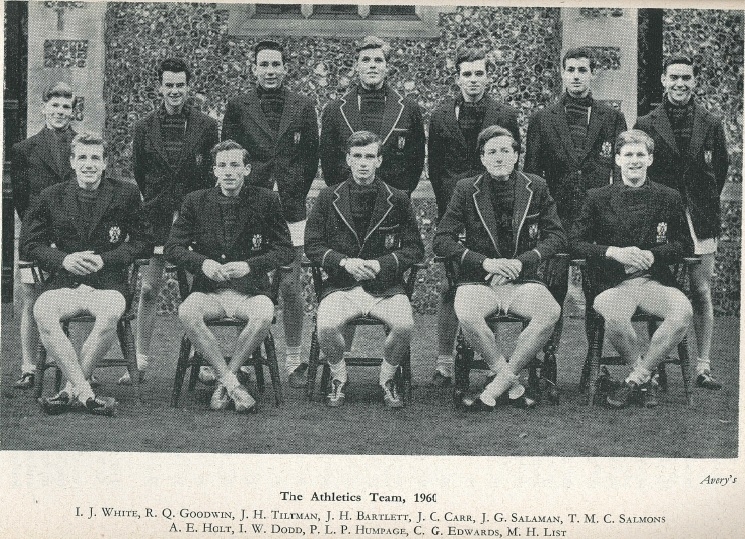 It is with great sadness that we announce the death of Old Brightonian and past Governor, Ian Wilfred Dodd (Junior School, 1950-1956, Hampden House, 1956-1960). After having suffered a heart attack, Ian died on Monday 17th October, 2016.

A Celebration of Ian’s Life will be held in Brighton College Chapel at 4.00pm on Thursday 10th November, 2016 following the Crematorium Service (for family only). OBs, friends and family are welcome to join us for the chapel service and reception afterwards.

The family respectfully requests that you arrive early, giving yourselves plenty of time to allow for parking and take your seats. Guests should be seated by 3.45pm. Unfortunately, the College cannot accommodate on-site parking unless you are a blue badge holder (to reserve a space please contact This email address is being protected from spambots. You need JavaScript enabled to view it. or telephone 01273 704 355). The Service will be followed by a Wake to be hosted in the Smith Cafe at the College from 4.45pm-7pm.

Sometime member and Vice Chairman of the College Council.

There will be many Brightonians who will be as sad as I am about the passing of Ian Dodd, who died on 17th October 2016 after a long illness. Pupil, distinguished Old Brightonian, parent, Governor, Scion of the Scholarship trustees, Vice President of the College, but above all an assiduous and constant supporter of the College in all its works over most of his life.

I first encountered Ian, when I entered Hampden House in 1956.After six years in the Junior school where in his final year he was Head of School, Ian had entered Hampden House a term before me and was given the unenviable task of being what they called back then my ''shepherd’., or mentor. Ian’s sole task was to get me through the dreaded initiation test, which consisted of knowing all that anyone needed to know about College life. Things like knowing who on earth ''holy Joe'', ''Spits', 'the Duke and 'daddy'' were, what they taught and where their classrooms were. Pretty much every other shepherd took a fairly relaxed view of all this. Ian did not. He coached and grilled me from morning to night and had the distinct advantage of not only being academically bright, but steeped in the history and ways of the College. I must have been the most prepared initiate in the history of Brighton College!

Even in those early days, Ian seemed to me to have a rather ascetic approach to life. These days he would be called driven. He certainly had a sense of humour, but life was a serious business and I think I was always aware that there was a sense of duty behind more or less everything he did. At the time I deduced that all this was probably borne out of his love and prowess as a cross country runner. It is fair to say that such an appetite for running the much feared house cross country race set Ian some distance apart from us ordinary mortals. This was an event which took place every year in the Spring term and in theory involved every able bodied boy in the school. It took place usually in the teeth of some of the worst weather Brighton can throw at you, on a fixed route of sheer purgatory, which rose sharply up a hillside track to the top of the downs and past the most revolting pig farm before an even steeper and progressively more slippery slope down to the new ground and home to the College. Apart from Ian, the whole of the rest of the school noted the vital words 'able bodied' and set about finding ever more ingenious ways of proving that somehow they were not. Ian however was not of this ilk. He was in his element. The worse the weather, the nastier the smell of the wretched farm the more he enjoyed it.

That Ian could run was in no doubt at all. As they said of Harold Abrahams, he could 'run like the wind. 'He became virtually unbeatable at any distance over 800 yards and dominated the cross country and mile races not only at the college but far beyond. He was Sussex track champion at both these distances for three years from 1958,59 and 60.

Ian's leadership qualities quickly became obvious and in 1958 he won a much prized Navy scholarship and by the time he left the College in 1960, Ian had been Captain of Athletics, Captain of Sailing, Head of Hampden house and a School Prefect. A glittering career in the Navy beckoned as he was accepted for entry into Dartmouth. Sadly, this was not to be as the first of what turned out to be a number of reverses in his life suddenly hit. Ian's years of distance running, especially on hard surfaces had irreversibly damaged his knees and he was invalided out of the Navy.

Thwarted in his Naval ambitions, Ian decided to follow his redoubtable father and became a solicitor. Ian's father had been Town Clerk to the Borough of Brighton and the family law firm was Griffith Smith, Dodd and Riley based in the Old Steine in Brighton. Ian qualified and joined the firm and in 1968 largely through his endeavours, College records show that the firm was appointed to be the College's solicitors. In 1972 Ian was elected a governor and began a period of unbroken service to the College which lasted for over 30 years.

During this time, Ian became involved in pretty much every conceivable part of College life. He was clerk to the scholarship trustees, a member of the Finance and general purposes committee, a member of the Hawkhurst Court committee, a member of the Junior Schools committee, Chairman of the Property committee and finally Treasurer to the College Council. It is fair to say that during the Blackshaw and Leach headships, Ian was one of the most influential and commanding figures of the College Council. Ian’s great skill was not only in applying his knowledge of what made Brighton College work, but using his background intelligence in knowing what made Brighton the town work. It was an undoubted benefit in having had a father who was Town Clerk, as Ian knew many of the personalities in local government. This, coupled with a burgeoning legal practice in his pomp placed Ian right at the heart of Brighton commercial life. Ian rose to be the senior partner of Griffith Smith,

As a governor, Ian was relentless. He worked extremely hard and was always very well briefed. He had a solicitor's attention to detail which quite often drove the rest of us mad, but his belief in and support for the College was never in doubt. An assiduous letter writer, he was the scourge of successive headmasters, governors and Chairmen with interventions, often on an epic scale. Intervention's which on busy school days could be less than well received!

When finally, Ian's long term as a governor came to an end, the governors elected him a Vice President. If there might have been thoughts of an easier life, it soon became obvious that Ian had other ideas. If anything the letter flow increased and Ian simply became the scourge of the AGM (to which all Vice Presidents are invited). The snag for each chairman and governor was that since Ian had largely written the Articles of Association himself, inevitably he knew the rules and regulations set out therein somewhat better than we all did!

One of the privileges of writing obituaries or giving an address at a memorial service is how much you learn about your subject outside the immediate life you both shared. For example, how many of us knew that in 1955 Ian became the youngest UK scout ever to attend a world Jamboree? Or, that in the 1960's and 70's Ian was the Scout Divisional Commissioner for Brighton and Hove? Did any of us know Ian had been awarded First Class honours at The Outward Bound School? What is well known is that Ian was a Rotarian of great renown and associated with many charities and boards of directors both in Brighton and beyond.

The final years of Ian's life were not easy as personal and health problems took their toll. In Margaret, Ian’s wife, together with his immediate and extended family, he found the perfect companions and supporters. Both Ian and Margaret continued to support Speech days at the College, Chapel services and countless events. They always presented the front of stoicism and the wry sense of humour which had been Ian's approach to life from the first day I met him.

From the distance of time, it may be difficult for those who were not part of the events described here to be able to properly appreciate the dynamics of the Blackshaw and Leach eras of the College. Name's which meant so much to the management, staff and governors of those days have largely passed into history and new heroes have emerged. However, whenever a history of Brighton College is written, surely the name of Ian Dodd will be writ large. He was a towering figure of that era whose contribution to College life should never be underestimated.