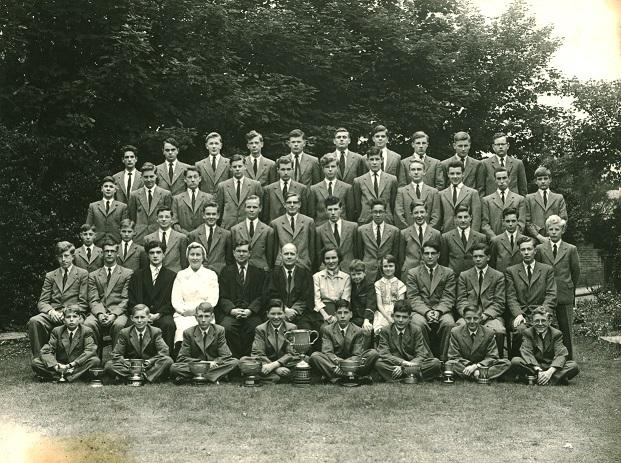 Charlie was born on 29th July 1943 in Sydenham, London to Maisie and Charles. When Charlie was about 4, the family moved to Brighton. Rationing continued for some years after the war. Charlie went shopping with his mum one day and they bought potatoes. They then went to another greengrocer and Maisie asked for some potatoes. Charlie innocently piped up, ’But mum, we already got some in the other shop’.

Charlie was an only child and his dad died when he was 7. Maisie was a single parent for some years, before marrying again when Charlie was older. Charlie’s grandparents had a vital role in caring for him while Maisie worked, at the London Stock Exchange.

Charlie went to boarding school at Brighton college, where he developed a love of sport. He represented the school at football, rugby and cross country running. Charlie loved football and played until he was in his 40s. When Charlie was playing football, he had some injuries and altercations. He used to tell the story of when he tackled John Motson and John had to hobble off. I’m told Charlie was quite competitive. He had a strong sense of right and wrong, in sport and in life generally.

Charlie supported Brighton and Hove Albion, though also took an interest in the team wherever his daughters were living at the time. For instance, when Libby was at college in Luton, she would get regular updates on how Luton Town were doing. Charlie was a regular at the Goldstone ground where he was a season ticket holder. He also went to the Falmer stadium in later years. Charlie attended the World Cup final at Wembley in 1966. He also followed the Gothenburg football Team IFK. He loved cricket, rugby and motor sports - Formula 1 and Motor GP.

Charlie travelled in his youth, throughout Europe. He enjoyed going to Spain and loved Sweden. Charlie settled in Kensington and following his parents’ footsteps, went to work at the Stock Exchange. He met Lena at a party and the couple married in Sweden in 1969. Lena was Swedish, and Charlie had to learn the language in order to marry there, which he duly did. They married on a snowy day in May 1969. They moved to Brighton to start their family and welcomed their four daughters - Marianne, Christine, Jackie and Libby.

Charlie left the Stock Exchange in the late 1980s and worked locally in Brighton and Hove. By now a single parent, he continued to work hard to support his family. Charlie worked for a while as a florist’s delivery man. He then went on to work as a barman in several places - The Kingsway Bowling Club, The Seafield pub, The Neptune and later The Robin Hood. He also worked at a local B&B making breakfasts. I’m told Charlie could always be relied upon to make a good fry up. Charlie cooked an early morning breakfast for Marianne’s husband Dom after he completed London to Brighton night bike ride.

I’m told Charlie was always an early riser. He would always bring his girls a cup of tea in the morning, or at any other time. The kettle was always on and everyone was warmly welcomed. Charlie was a kind man, a huge support to his family and would do anything to help a friend

The girls have happy childhood memories of their dad. Meeting Charlie after work - Going swimming at Brighton college and having a lovely bag of sweets each after. Going to the pub and having little bottles of coke. Running around the bowling club where Charlie worked. The girls enjoyed trips to the cinema with their dad. They remember going to see Ghostbusters and nearly being thrown out as they were all singing. This rowdy behaviour being enjoyed and encouraged by Charlie.

Charlie could certainly be mischievous and was known at times to encourage bad behaviour. One of Grandson Oliver’s teachers once reported, when he was quite young ‘he does appear to be quite sarcastic on occasion’. It was clear that this was learned from grandad. Charlie would tease his grandchildren and was always up for a laugh and a joke.

Charlie was an avid reader, and a fan of Dickens. He loved detective stories, particularly Agatha Christie. He also enjoyed Colin Dexter, Inspector Morse and Maigret. Charlie’s favourite book was the Count of Monte Cristo by Alexandre Dumas. A historical novel largely about justice.

Charlie listened to radio 2 and was a big fan of Terry Wogan and his breakfast show. He also liked Chris Evans and appreciated his humour. Charlie loved music and went to many concerts over the years, both in his younger days and later with his daughters. Charlie saw The Beatles and The Who. He took his girls to see Cliff Richard and later they all went to Kids from Fame, and Aha. Charlie was a fan of Tina Turner and Bryan Adams.

Living most of his life in Brighton, Charlie became a local character. He was known to many and would always have people stopping to say hello when he was out and about. Charlie lived above the Robin Hood pub for over 20 years and made good friends there. He enjoyed a pint of Harvey’s after doing his shopping.

Charlie was fiercely independent and could be stubborn at times. He was a private man in some ways and didn’t tell people when he became unwell. Charlie had the unswerving love and support of his dear daughters. They would like to thank family friends Yves, Maria, Gemma, Chris and Anna, Neil and Alanna for their care and advice.