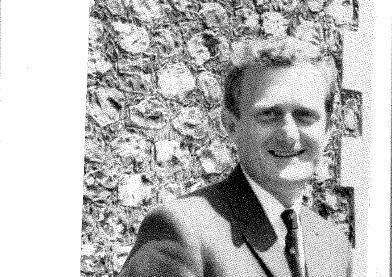 Peter Points, whose association with the College spanned some 45 years, died in a nursing home in Winchester on 4 February, aged 90.

He joined the Common Room as Head of English (succeeding Geoff Lees) in September 1963 and shortly afterwards became Housemaster of Hampden and Master in charge of the CCF Contingent. In 1967 he was appointed Second Master (following Peter Gough’s departure to Aldenham). This is a remarkable workload by any standards, and it speaks much of Peter’s talents and energy that he managed all of these roles with such conspicuous success at the same time as being an engaging and helpful presence for pupils, staff and parents alike. A further mark of his versatility came in 1967 when he cheerfully took over the production of a highly acclaimed Twelfth Night, to assist an ailing colleague.

In 1969 he was appointed head of Pangbourne College. He was the first civilian head as the college prepared itself in a changing world for a more academic purpose than to produce naval officers. Peter was well up to this role and Pangbourne flourished under him, achieving HMC status during his time and very respectable examination results. He retired in 1988 and he and Margaret returned to Sussex to live in their cottage in Wilmington, where gardening, entertaining and of course reading became serious occupations.

Peter’s second incarnation at Brighton came about when he was the Common Room’s unanimous nomination as their representative on the governing body. He served on the board with distinction, instinctively knowing the difference between governance and management, and equally being able to distinguish between intelligent argument and mere flannel. He was a source of wise counsel for both John Leach and Anthony Seldon, who asked him to chair the College committee of the board in the early 2000s, where his detailed knowledge of how schools actually work was of inestimable value. He was a good chairman, and a helpful and reassuring voice at the end of a telephone.

Some five years ago the Points left Sussex for Hampshire to be nearer the family and to receive support in their day-to-day living. Margaret died 2 years ago and Peter moved to a nursing home in Winchester, where he remained alert and was charming company to the very end, though becoming increasingly frail.

He leaves Joanna and Simon and five grandchildren, to whom we send our sympathy.