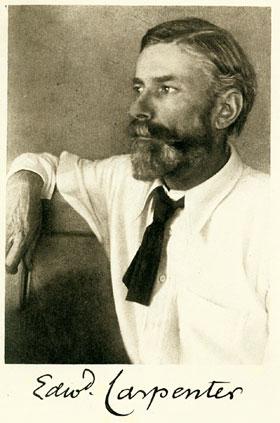 Carpenter became well known as a vocal & respected supporter of gay rights, particularly during the Oscar Wilde trials. He is also credited with bringing sandals to the mainstream in the UK after his travels around India, & for popularising the phrase the “Simple Life.”

Carpenter was born on the 29th August 1844. At the time of his entry into Brighton College, his family lived in 45 Brunswick Square, Hove. His father was a Governor at the School, having served as a Commander in the Royal Navy, during which time he took part in the capture of the American privateer Rattlesnake in 1814. Edward’s eldest brother, Charles Wilson Carpenter, was one of the first pupils to come to Brighton College, as only the 27th pupil to be registered, in 1847.

Edward first arrived at Brighton College in January 1855, on his father’s nomination, only to leave in Midsummer 1856. The School Register provides Edward’s reason for leaving as ‘friends leaving Brighton.’ It is believed that around this period in his life, Edward spent time in Heidelberg, Germany.

Edward returned to the School in late 1857, at the same time as his youngest brother, Alfred. The second of the four brothers, George, came to Brighton College in January 1858. This time Edward stayed until late 1863, before leaving to study at Trinity Hall, Cambridge. After University, he joined the Church of England as a curate. In 1871 Carpenter was invited to become tutor to Prince George Frederick (who would later become King George V) & his elder brother, Prince Albert Victor, Duke of Clarence, but declined the position. Instead, Edward left the church in 1874, & eventually moved to Sheffield, where he began to develop many of his philosophical views.

Sadly, there are no photographs in the archive that include Edward, as there are very few photographs from that early in the school’s history. The school magazine only began production in 1869. This leaves us with little information on Edward’s time at Brighton College. We know that he displayed a flair for the piano at an early age, & only began to show his academic ability relatively late in his youth, but in time to secure himself a place at Cambridge.

However, in his later years Edward occasionally wrote about his time here. One of his most insightful comments was a portrait of the Principal (the title changed to Headmaster in 1885) of the School, at the time Edward was a pupil here, Dr John Griffith. Edward described Dr Griffith as a ‘burly, headstrong, muddle-headed, perhaps rather good-natured man,’ who would often arrive into class late, with hair ‘a-tumble,’ & looking sleep-deprived. This corroborates with the views of other individuals who were at the School during Griffith’s tenure, that the Principal was an unconventional man.

Edward died on the 28th July 1929, just over a year after his partner, & fellow gay activist, George Merrill. The two men had lived openly as a couple for thirty years, & are now buried together, at the Mount Cemetery in Guildford. Today, Edward is still remembered as a pioneer of gay rights.