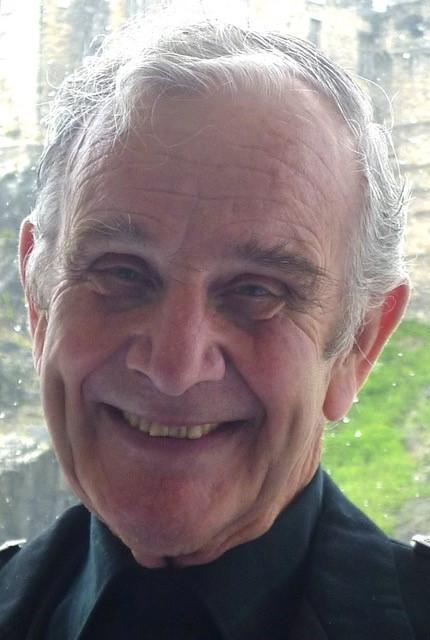 We are sad to announce the death of Reverend David Grigor (Chaplain 1977-88), who passed away peacefully in his sleep at the age of 92.

David was Chaplain at Brighton College from 1977 to 1988 and led the teaching of RE at the school.

However first and foremost, David was a pastor to the pupils. He was a big personality with a big smile affectionately nicknamed “Smiley”, and he cared for everyone at the College. He was also a prominent figure in many other aspects of College life. In particular, staff and students will remember David for his enthusiasm and energy for the CCF section. He ranked as a Forces Chaplain in the RAF as well as the Army and was integral to the life of cadet training. He also supported the sailing club, rugby and accompanied pupils on school trips to India and Italy. He was regularly seen supporting many of the 1st XV games at home and away where his voice could be heard cheering on the rugby and cricket teams. His passionate voice was also heard in his vibrant singing in the school Chapel and his sermons on a Sunday.

After leaving Brighton College, David took on a number of chaplaincy roles, notably Warminster College (1989-92), San Pedro at Costa del Sol (1993-94), and George's Church at Tunis (1996-98). David always remembered his time at Brighton College with much joy and happiness and the wonderful staff and students who attended at that time.

“We remember Dad as being our guiding light, always there to support us and we miss him very much ”

David and Stella Grigor joined the school in 1977 and settled in very quickly, along with their family.  Former pupils of Brighton College will of course have their own particular memories of the Grigors. On a personal note, David officiated at the wedding of our son Jimmie, at the funeral of our son Ben and christened all our grandchildren.
Chaplaincy is not an easy role with the chaplain being still under the Bishop’s as well as the Headmaster’s aegis. But Bill and David were at one in their devotion to the School Chapel. Staff were encouraged to take the morning Chapel Services which they did thoughtfully and successfully.

David had a very warm, friendly, and outgoing personality combined with deep faith and charming simplicity of outlook. He ministered to all members of the College, and officiated at a large number of weddings in the School Chapel between former pupils and also a number of College staff, which included a double marriage of two members of the kitchen staff to their respective brides and their children! His warm and generous nature encompassed all aspects of life at the College including a great keenness for sports.

Bill and I had great respect and affection for David and Stella, who upheld in their lives the highest of values to the lasting benefits of many Brighton College pupils and to the Brighton College Community in general.

David will be remembered by OBs as a life force, full of great warmth and friendliness, with a broad smile. David was a most committed schoolmaster, joining wholeheartedly in many aspects of school life, not least with his distinctive (and loud) voice on the rugby touchline. He led charitable ventures in Brighton and in Brazil, and cheerfully joined a cricket tour to India in the late 80s. His wife Stella was the 2nd girls’ housemistress, when the girls became part of their extended family at Clarendon Lodge, south of Eastern Road. Their sons, John and David - a talented artist - were both in Leconfield. The Grigors went on to Warminster School, David as chaplain and Stella as a Housemistress.