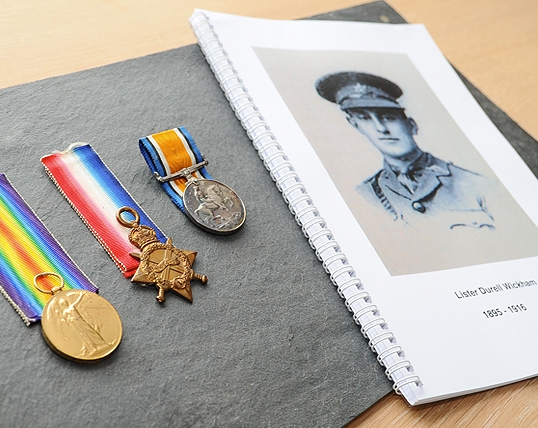 The family of Lister Durell Wickham (Ch. 1908-13) donate his medals to The College

The North family bestowed a great favour on the College in June 2015 when they arranged for the medals of Lister Durrell Wickham to be donated to the College. Head Master Richard Cairns was delighted to meet with the Phillipson family and to receive the medals, which are now on display in the College Chapel. After serving at Gallipoli Lister had been home ill, and had married his sweetheart musician Marguerite Dickensen.

Lister was later killed in action, on July 3rd 1916. After the war Marguerite remarried and went on to have a family (though she always kept Marguerite Lister as her stage name), and the North family were able to make contact with her niece, Jane Phillipson. Marguerite apparently always kept a photograph of Ben on her piano, and Marguerite and her daughter Prudence remained close to the Lister family throughout their lives. The Phillipsons were therefore delighted to hear from our fourth former, Harry North (He.) and his father Charles, and generously offered to donate the medals to the College.

We are so grateful for all of the hard work carried out by the North family and the many other impressive projects undertaken by our fourth form.

If you would like to see the medals they are on display in the College Chapel with the Book of Remembrance. Lister Wickham was the son of the Head Master of the Junior School, so it is particularly poignant to have the medals, and we are very grateful to the North and Phillipson family.