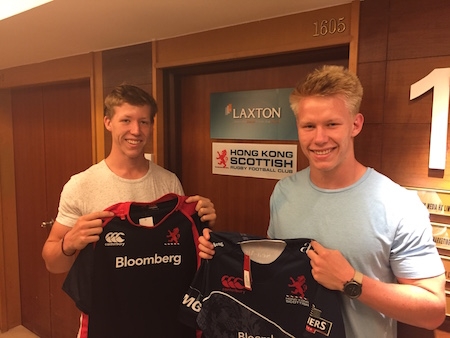 We are delighted to hear that Bloomberg Hong Kong Scottish have announced the signing of Gregor and Marcus Ramage (Ha. 2011-16) for the upcoming season. The 18 year old twins have recently moved to Hong Kong as part of Hong Kong Scottish’s first "Gap Year Programme." Marcus and Gregor have recently completed their IRB level 2 coaching certificates through The Hong Kong Rugby Union and will assist HKS coach in the local community as well as coach their junior club, The Flying Kukris.

Marcus and Gregor will be gaining valuable work experience through internships in Hong Kong before starting University next year.

Marcus has recently converted from back row to centre and Gregor is an open side flanker and both players have represented Scottish Exiles and London South East at representative levels. Both players are qualified for Hong Kong through birth and will hopefully follow in the footsteps of fellow HKS players, Mark Coebergh, Austin Robertshaw, Jonny Healey (all duel registered with DB Pirates), Ale Nardoni, Michael Earley and Ken Encarnacion (duel registered Gai Wu) in representing Hong Kong U20 in the near future.

We wish them the best of luck and look forward to hearing about their progress.