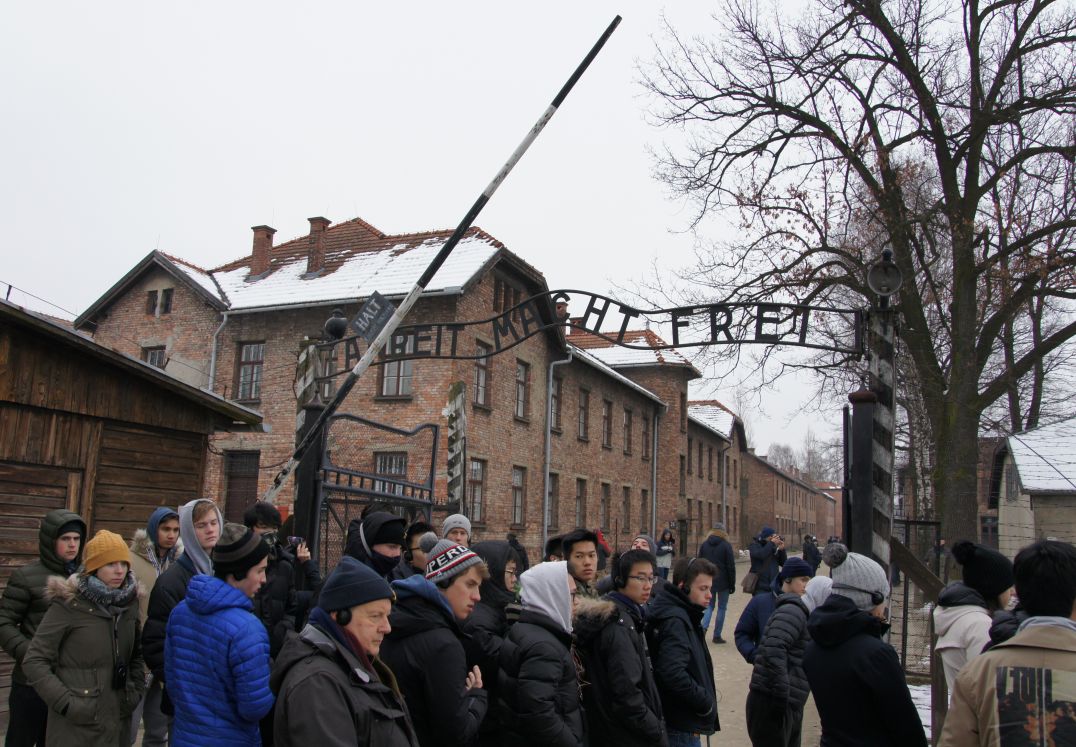 As part of the Head Master's new introduction to the L6th programme, every pupil in the year group took part in a visit to former Concentration Camp in Poland, Auschwitz-Birkenau.

'I doubt that I need to say how valuable I believe that this experience has been for all the pupils. At a time when there is so much political uncertainty, with worrying signs of rising intolerance across the world, we would all benefit from coming face-to-face with the terrible consequences of intolerance and hatred. So, this represents an important opportunity for our pupils to reflect on what really matters in life, and how vital it is for them (and us) to stand up always against prejudice in all its forms.'- Richard Cairns

'I will always remember the sign at the front of the camp which says: 'Arbeit macht frei'- tr. 'work sets you free'. It was sickening to think that thousands of people had looked at the exact same sign as me, only to die a few hours later.'

'I felt fairly blank. I kept having to remind myself that this is where over a million people had died. But it's so incomprehensible that you can't grasp the evil of it'

'The first thing that struck me was the freezing sub-zero temperatures and the thoughts of what it must be like for the victims to not only work in these conditions but also live. Adding to these the completely open, unprotected, barren lands and the stories of how little clothing the priosners were wearing shows just how terrible to atrocities were.'

'I wore seven layers and was still cold. These malnourished victims were worked to the bone and given thin pyjamas and wooden clogs.'

'I feel that the whole experience put into perspective many of the problems that I deal with on a daily basis myself, which pale in comparison to those faced by the victims of the holocaust. For me the most profound moment was when we saw for the first time the scale of Gas Chamber 3 and heard the accounts of what took place mere feet from where we were standing, only 75 years ago.'

'What shocked me most were the piles of personal belongings: belongings of the innocent victims who thought that they were heading to a place where they could live peacefully.'

'The exhibition of the suitcases was harrowing, which had the owner's identity  handwritten on the front, desperately hopeing that one day they would be returned to them.'

'It was particularly distressing, especially when I imagined what it would feel like if my own family looked like that and were treated in the same way.'

'I felt a weird sense of guilt and disbelief as if I hadn't properly realised how huge the whole process really was.'

'Walking through one of the first gas chambers at Auschwitz I, as I walked through looking at various marks and the walls I felt extremely empty and knowing that thousands of people had died where I was standing is an experience that words cannot describe.'

'The moment of realisation when you go to Birkeanu, and realise that those who went to Auschwitz were the lucky ones- it is truly sickening.'

'It is such a prevalent reminder to the world that we must tolerate and live by one another in utmost care and compassion.'

'It's here, where absolute evil and perpetrated, that the will must resurface for a fraternal world, a world based on respect of man and his dignity.' - Simone Veil, Auschwitz survivor and former French Health Minister.