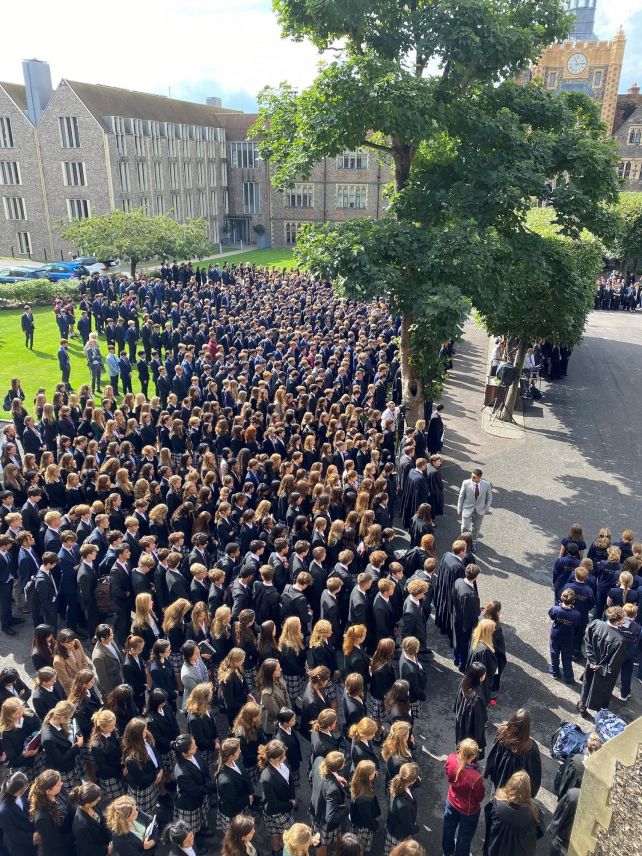 Following the announcement of the death of Her Majesty Queen Elizabeth II, the whole school gathered in the Quad to reflect on her life of service.

Leading a reflection on her seventy years of leadership, Richard Cairns, spoke about The Queen’s life of service and how, in all that she did, she sought always to do what is right. The Heads of House and Head of School joined the Head Master in laying flowers in front of the Chapel plaque, unveiled by The Queen in 1962 when she visited the College.

In his address to the pupils, the Head Master reflected on the late Queen’s life of service and her steadfast commitment to the promise she made to the people of the British Empire on her 21st birthday:

“I declare before you all that my whole life, whether it be long or short, shall be devoted to your service”.

"She stayed true to that promise for more than seven decades even though, at times, it must have taken a terrible toll. And throughout it all, under the increasingly intense scrutiny of the media, she demonstrated a remarkable strength of character and an unwavering determination to do the right thing by her people. An abiding image of this profound sense of duty and responsibility is that of the Queen sitting alone in her pew in St George’s Chapel in Windsor at the funeral of her beloved Philip. Alone. Denied the close comfort of her children and grandchildren. Alone, because that was what Covid regulations stipulated. She led by example."