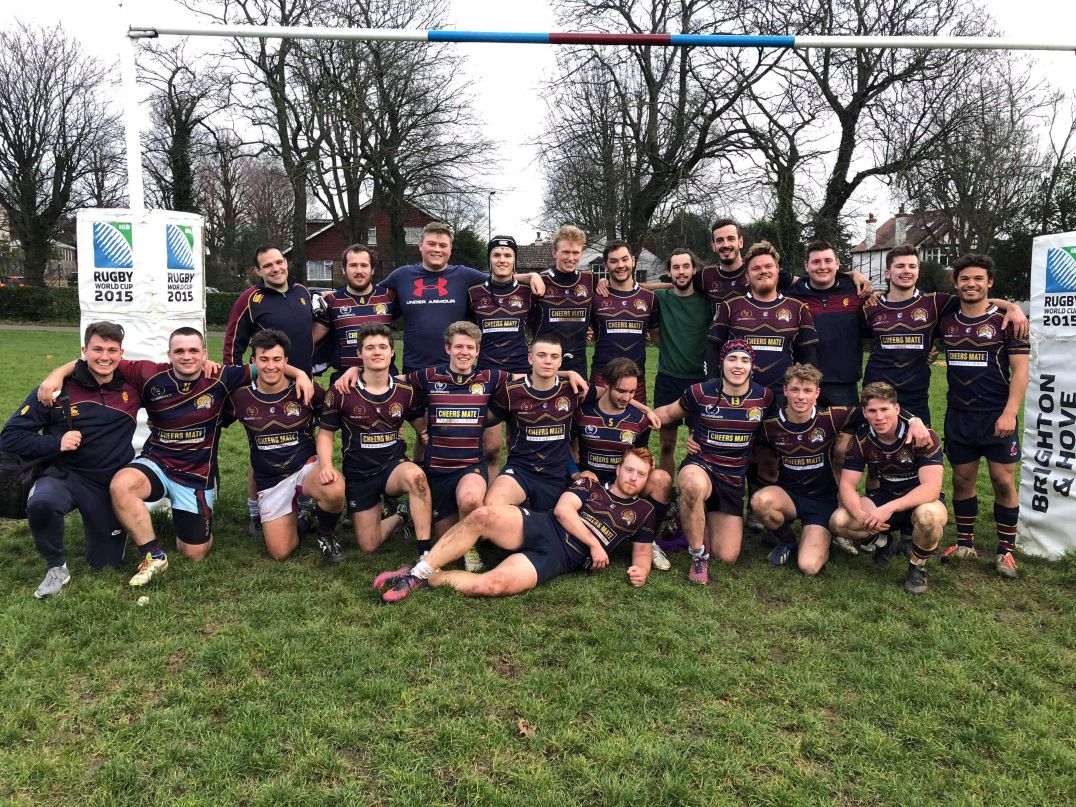 The match was inaugurated in 2008 to commemorate the life of Peter Rumney (Ha. 1937-39) who’s connection with the College and the Old Brightonians is remembered particularly through Rugby, from when he reformed the OB Rugby Club in 1959. Still going strong, the OB Rugby team Los Pelicanos Hermanos is widely supported by our alumni community, and Peter is still very much remembered by us, this year particularly through John Aiken’s (Al. 1977-81) pre-match speech fondly reminiscing about him.

In a physical first half, Hove dominated possession and territory as they used forward to good effect and at one point led 10-0 due to this power. However, a lovely cross field 22 metre drop-out by Jon Searle (Ha. 2013-18), claimed by Lawrence Daraio (BCPS/Al. 1996-01) and offloaded to Will MacKinnon (Ab. 2012-17) meant the OBs were not far off. Some nice interplay on the wing and Henry Simpson (Ha. 2013-18) breaking round the outside to score gave the OBs a 12-10 lead at the break. Captain Lewis Edwards (Du. 2008-15) was instrumental in the team talk, and the boys returned with 7 changes on the field. It was a loanee for the second half, Nathan Parker (Du. 2008-15) who scored for Hove to give them a 15-12 lead of their own. Again the pendulum swung towards a young (average age 23) OB side.

Tries from Leo Egerton-Gable (Al. 2011-16) and the laters were straight for the kick off, before a Harry Venn (Ab. 2012-17) intercepted and Loewy Simmons’ (Ry. 2013-15) (Man of the Match) individual score. The final try to round off a superb game was Benji Wroblewski (Team Coach) who had a neat interplay with Jon Searle before coasting in, a move started inside their own 22. The final score was 39-15, and the Old Brightonians RFC retain the Peter Rumney Tropy until next year.