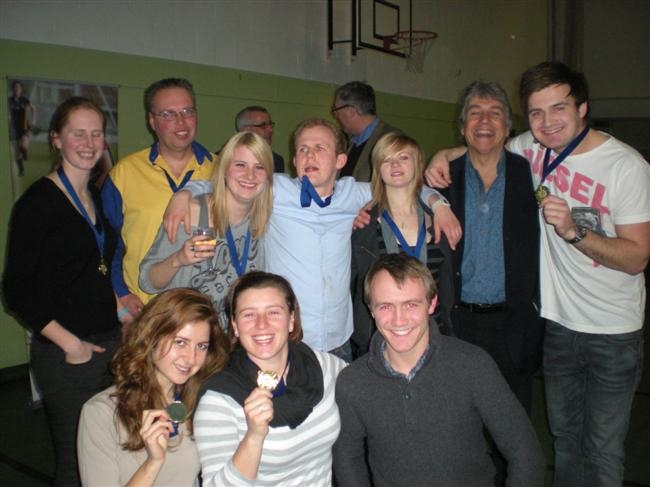 An enthralling evening of sporting knowledge and prowess was possibly being held somewhere on Thursday 3rd March, but at the Brighton College Sports Quiz the name of the game was definitely fun and fundraising.  Ian Braid kicked off the evening showcasing the fantastic work of SportsAid, joint recipient of the evening’s proceeds, who offer financial support to talented young sportsmen and women at the beginning of their careers.  John Inverdale was magnificent as quizmaster, encouraging competitive spirit and berating those underhand or rather under-table tactics being employed by certain teams.

Particular mention should go to our winning teams who were awarded commemorative medals for their achievements, and of course the valiant losers of the evening who were awarded the coveted Wooden Spoon:

The evening gave the chance to unveil revised plans for the New Ground Pavilion to an enthused crowd, including details of site improvements such as coach parking facilities and floodlighting of the netball and tennis courts.

The Sports Quiz launched a series of events to raise much-needed funds for the New Ground Pavilion.  An electric atmosphere, enthusiastic audience and, of course, the wonderful singing of the 1st XV, all contributed to making the event a huge success.

SportsAid offer financial support and recognition to talented young sportsmen and women when they need it the most; at the start of their journey to international success. They have distributed more than £30 million to athletes throughout Britain and give around 3,000 awards every year, with alumni including Sir Steve Redgrave and Dame Kelly Holmes and Brighton College pupils being amongst their current recipients, helping them fulfill their sporting potential.