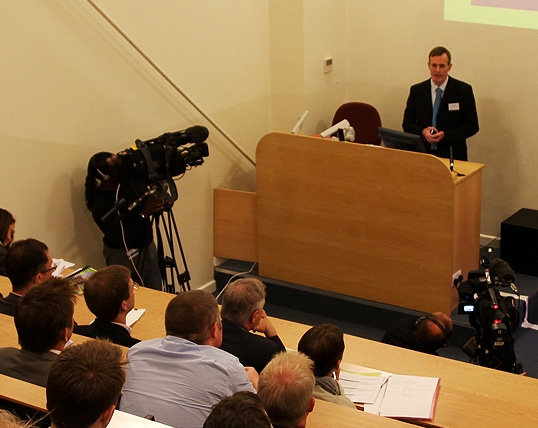 On 31st May 2012 Brighton College hosted an important debate about the future redevelopment of the city of Brighton and Hove. Some 100 guests, including Caroline Lucas, MP, Councillor Jason Kitcat, Leader of Brighton and Hove City Council, as well as architects and developers from across London and the South East, packed the Rose Lecture Theatre for the ‘City Plan Question Time’.

The Question Time panel of experts, which included Paul Westbrook, Bursar of the College, fielded a wide range of questions about plans for the city, and the best way to ensure that its key sites are developed wisely. The architecture and interior design of the Simon Smith building were greatly admired by the guests at a reception held afterwards in its café, whilst Caroline Lucas expressed delight at being in a ‘Question Time’ audience rather than on its panel for once!

Ed Allison-Wright (D. 2001-06) writes:
"On behalf of Brighton & Hove Economic Partnership, Sprunt and Centurion Group, I would like to thank you for participating in last week's Question Time debate; which was a great success and involved some interesting discussions.
I hope that the presentation from Brighton & Hove City Council provided you with a clear outline of the development and regeneration aspects of the City Plan and I now encourage you all to put your comments and feedback to the City Council, as we will be, in order to help ensure that the aspirations of the development, construction and regeneration industries are appropriately recognised within the final version of the City Plan, when it is submitted to the Secretary of State in March 2013.
Here is the link to provide feedback within the current public consultation period, which runs to 22nd June 2012; so please get your comments in asap if they are to be considered"