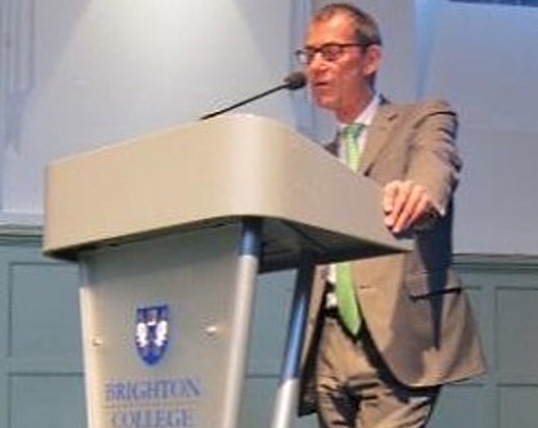 Entrepreneurship Day 2012 - The competition hots up!

Then we heard from Duncan Watts (R. 1979-84), founder of The Curious Group and the Rocket Restaurant chain. Duncan had tried the professions, graduating in law before becoming an accountant, but quickly realised that he was more suited to the life of an entrepreneur. Duncan urged the pupils to think outside the box and to never become stuck in a career because it was expected of them. He did concede, however, that his knowledge of accounts has proved extremely helpful over the years.

Now it was time for the Lower Sixth to show the judges what they could do. Breaking out into classrooms in House groups, and under the guidance of their advisors, they refined their ideas, identified their business models and USPs, and developed their mission statements. The judges visited each team in turn immediately spotting flaws and suggesting opportunities; beginning the constant process of iteration.

After break our next speaker, Ingram Losner (D. 1973-78), co-founder of Proven Solutions Inc, whose offices are in six US cities and London, spoke about the importance of behaving ethically, as a team and with passion. He also stressed the importance of encouraging the younger generation to become entrepreneurs as he is "inspired by youth", doing his bit by providing "seed" capital to a technology start-up. In May of this year, Proven was named the number one staffing firm in San Diego. More time in classrooms followed.

Our final speaker, Sir Michael Lockett, a serial entrepreneur who has founded over 20 companies, provided fascinating insight into his journey and his passion for founding and growing his companies was evident from the start. Described by The Telegraph as "the busiest man in Britain right now", 2012 saw him mastermind some of the most significant events in modern British history. He was in charge of the official unveiling of The Shard, he played a major role in both securing the Olympic Games for London and then organising the Opening Ceremony; and, he was the CEO of the Thames Diamond Jubilee Pageant, for which he received a special knighthood from the Queen just two weeks ago. Sir Michael impressed upon the pupils just how important it is to be enthusiastic about everything you do; not believe in the fallacy of the work/life balance, which implies that work should be something less than enjoyable, and to know that, on reflection, you have lived the best possible life you could.

A most productive and enjoyable day was had by all. For more information about the Entrepreneurship Programme please email This email address is being protected from spambots. You need JavaScript enabled to view it..