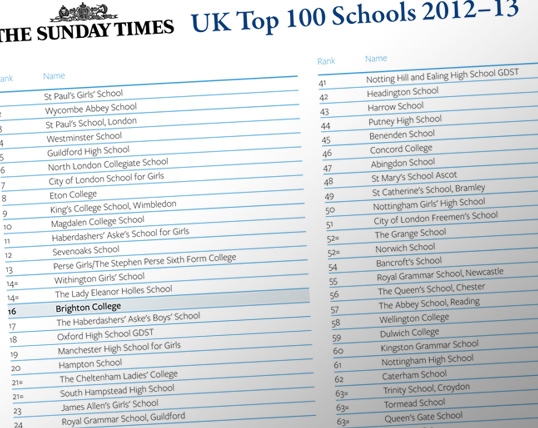 The Sunday Times has published its latest table of the UK's Top 400 schools and I thought you would be interested to see the attached extract. The table places Brighton College as the second highest performing co-educational school in Britain, the fifth highest performing boarding school in the country and the only school in Britain to have improved its academic performance every single year for six years. It also places the College above many of the country's most selective schools. Brighton is the only Sussex school in the Top 100.

Academic results are of course only part of the picture. In the last two weeks alone, we have been entranced by pupils' performances in The Sound of Music, the Autumn Concert and Evening of Dance, have seen three of our netball teams reach the national finals and the First XV named 'Team of the Month' by the Evening Standard, as college life proceeds in all its diversity. However, it is wonderful to see how our pupils continue to excel academically, year after year, and to see their hard work recognised in this way. Congratulations to each and every one.