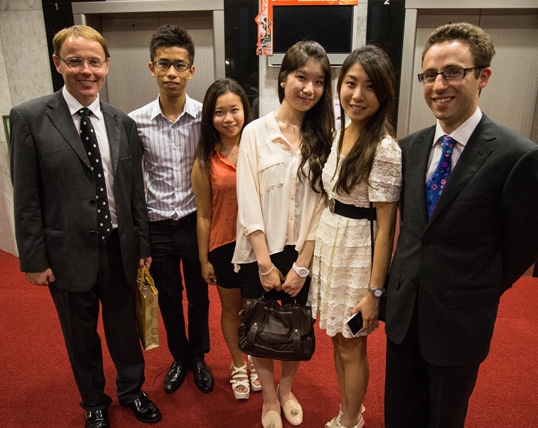 In attendance was a large turnout of potential parents and their children, plus 21 Old Brightonians. The Headmaster was joined by College staff, Alan Bird (Head of 6th Form), Leah Hamblett (Head of Middle School) and Mrs Alison Withers, School Registrar.

As far as we are aware, this was the first 'official' OB event to be held in Hong Kong and, as such, the large number of attendees was quite remarkable.

The China Club is a beautiful venue, located atop the old Bank of China Building in Central and decorated throughout in a combination of traditional Chinese / art deco style. It proved to be a most atmospheric and entertaining setting for the reception.

The Library in which we convened was jam-packed and I wonder whether we actually exceeded the permitted capacity, such was the crush throughout most of the evening. The large attendance compounded the fun and sense of occasion. It also challenged the room's air conditioning on possibly one of the hottest, most humid evenings of the year, adding to the atmosphere and reminded us all that we were truly in the Tropics!

In 'Town Hall' fashion, the Headmaster delivered a stirring 'impromptu' speech from half way up the Library's spiral staircase. He set out the many attributes of the College and its approach to education. Resourcefully, he then invited a couple of recent school leavers (our most recent new joiners to the OB ranks), who are Hong Kong Chinese, to speak to the crowd in Cantonese. This was extremely well received by the local families in attendance; the Headmaster had to admit, however, that he had no idea what was said!

The OB contingent then moved to the balcony where we enjoyed a splendid view of the Hong Kong harbour over more cocktails. This proved to be very sensible in view of the ever rising temperature in the Library! An excellent OB networking session then ensued.

OBs in attendance were: