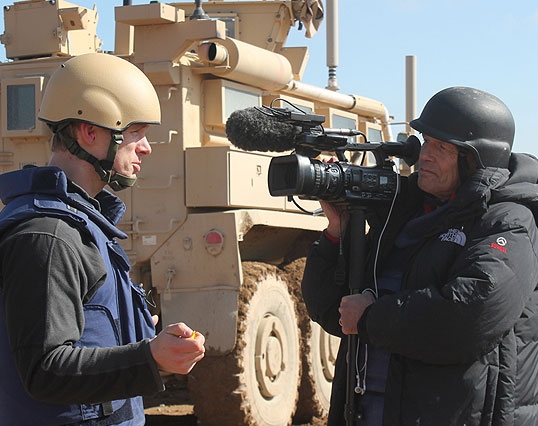 "It feels pretty strange that I'm going to be going back there, I had thought that I'd seen the last of the place. I am fearful that nothing will have changed and that, indeed, it may have gotten worse. I think I probably was quite pessimistic when I left." - Bertie Kerr, former Royal Marines Commando

This new ITV documentary features former Royal Marine officer Bertie Kerr and his emotional return to Afghanistan, eight years after he was first plunged into the planet's most dangerous war just three weeks after passing out as a young officer.

Bertie had been filmed throughout his training by film-maker Chris Terrill who then followed him to the front line in 2006 where they both came under fire together for the first time. Now Chris follows Bertie back to the killing fields of Afghanistan to revisit their past and to assess the country's future after 13 years of war.

Chris's landmark series Commando: On The Front Line, which aired in 2007, told the story of young Royal Marines going through 32 weeks of the longest and hardest military training in the world before being immediately deployed to Helmand Province and the escalating fight against the Taliban insurgents.

Most of the recruits failed to get through the brutal training but Bertie was one who succeeded - along with Chris, who at the age of 55 earned an honorary Green Beret for passing the gruelling commando tests alongside the young troops. This gave the film-maker the training, fitness and credibility he needed to be allowed to follow the commandos in to the teeth of battle on the front line.

Three weeks after Bertie finished training Chris filmed him leading his men on a dangerous dawn assault on a Taliban stronghold when both came under enemy fire for the first time. Eight years on and now a banker in the City Bertie and Chris, now close friends, return to war-ravaged Afghanistan as British troops prepare to withdraw. They want to find out for themselves what effect the war has had on the Afghan people.

Bertie, who lost several of his men in the conflict and saw many more seriously injured, shares personal and private entries from his diary at the time and, reflecting on the past, considers whether it was a war worth fighting. Having left the Corps in 2012, Bertie reveals what he still misses about the Marines:

"The camaraderie. That shared culture, that shared spirit. And we lived life so intensely, you know, every aspect of it. We were young, we had a lot of energy. What we were doing was very exciting, we just lived life to the full."

On the ground at Camp Bastion, he watches new Afghan recruits practising on the rifle range and handling weapons for the first time, all of which bring back his own memories of training.

"Day one, week one. Just like Royal Marine recruit training, you get taught how to make your bed, and get your hair cut. But, you know, they'll have come in from all over the country and so they'll be Pashtun, Tajiks, Turkmen, Uzbeks, Hasaris, and they'll all just be thrown in together just like you have Scousers and Mancunians and Taffs and Cornish and Scots and Geordies, and they all have to put aside their differences and just crack on."

He reflects on how professional the Afghan recruits are now, compared with eight years ago. He recalls one occasion when he was out on a night patrol in Helmand and the sentries of the Afghan army camp they were approaching signalled their sighting of them by shouting across the valley, 'British soldiers are coming to see us,' immediately alerting the Taliban who opened fire.

"It's phenomenal, the change since we were both here in 2006 when there was very basic training, I think, for the ANA, the Afghan National Army. They just had a few weeks and then they were just shipped out to Kajaki with us. They weren't very well disciplined, they weren't very well trained."

In 2006, Chris filmed Bertie leading his troop into a dilapidated school to show the youngsters that they needn't be frightened of British soldiers. This time, they visit a pioneering school in Kabul which unusually has male and female pupils. It's called the Marafat High School and eight years ago its pupils numbered just 37. Today there are nearly 3,000 and half of them are girls. Bertie and Chris make their visit in the school holidays but still around 600 have come to school for extra lessons - such is the hunger for education.

"It's quite inspiring really, to see these kids, in mid winter, and there's snow everywhere... they can get lessons during the holidays when every other school is closed down. I think they're all going to be doctors or engineers or scientists, that's what they all said they were going to be. Or teachers. So I think the more of this very much the better."

Launching an attack against a Taliban position in Kajaki in January 2007, the first man Bertie lost was called Tom Curry, a 21-year-old Marine nicknamed 'Vinders' (as in Vindaloo). Now, returning to Afghanistan allows him to reflect on the loss of Tom just weeks after landing on the ground in Helmand Province. He relives the firefight by reading from his war diary and then confides that he was the one who shot Tom's killer just seconds after he died.

"Yeah. I dropped him. I think someone else put some rounds into him as well, straight away. And he died straight away. I'm glad I did it but I'm not glad that I had to do it. Does that make sense?"

Bertie and Chris visit the British Cemetery in Kabul, where Tom's name is on a memorial along with the hundreds of other UK troops who died in the war. Looking at Tom's name etched into the grey slate Bertie reflects on the death of so many young men and, fighting back the tears, considers the sacrifice and the legacy of combat.

"You know laying down your life at that age, 21 and two weeks, he couldn't possibly have comprehended all the arguments on either side and all the justification for the fight. That justification was there, there were good reasons for what we're still doing today. But I didn't understand all of them, I don't think anyone did. It's so complicated. And so we didn't know... or fully understand exactly what we were doing. So you had to have faith, you know? Faith starts where your knowledge ends and so you had faith that what you were doing was right.

"It's taken eight years and it's still precarious, it's still by no means a dead cert that it'll work out for Afghanistan. I mean there's some pretty good hopes and good potential, but..."