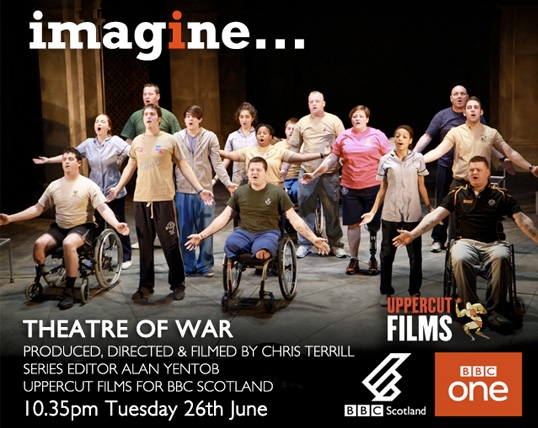 As reported in the last edition of The Pelican, Chris Terrill has been working on a project called 'Theatre of War' which will be shown on BBC1 at 10.35 on 26th June.

"Imagine: Theatre of War" tells the extraordinary story of a unique collaboration between two very unlikely partners that led to a ground-breaking West End play that shocked, entertained and inspired all who saw it.

THE TWO WORLDS OF CHARLIE F saw professional front line soldiers, all of them badly injured - some of them amputees, some suffering with post-traumatic stress and even severe brain injuries - join forces with a professional theatre company to help write, rehearse and perform a play based on their experiences of war in Iraq and Afghanistan. What happened when they swapped the unforgiving theatre of war, for the London stage? Chris Terrill follows all aspects of the process, from rehearsal room to triumphant performance, to tell this extraordinarily moving and powerful story for the BBC.