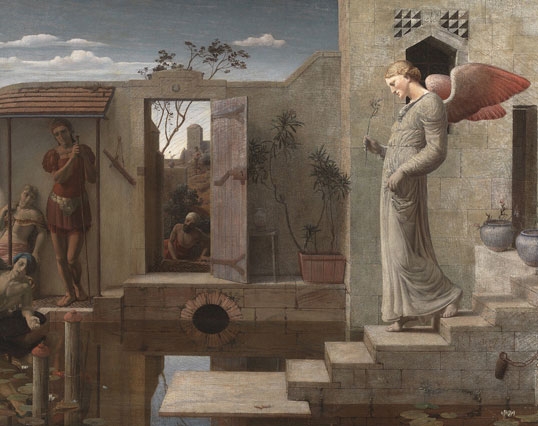 Robert Bateman (1842–1922) was an English painter, architect and horticultural designer.

He was the third son of James Bateman FRS (1812–1897), the accomplished horticulturist and landowner, who built Biddulph Grange and its gardens, in Staffordshire.

The Pool of Bethesda is at the Yale Centre of British Art. The Dead Knight is in a private collection, but there is a fine large color reproduction in the book The Last Romantics (1989). The Lily or the Rose he presented to his old school, Brighton College, where it hung for many years on the main building staircase until destroyed c.1960 after Brighton Royal Pavilion Museum and Art Gallery refused to accept it as a gift.

As well as paintings, Bateman designed religious woodcuts, his work appearing in The Latin Year, The Church Service and A Century of Bibles.

Robert also practiced as an architect, most notably building Collyers, a house near Petersfield.

Robert married the daughter of the Dean of Lichfield in 1883, and became a wealthy owner of property and land. His fortune led him to become a noted philanthropist of the time. He and his wife Caroline lived near Much Wenlock, Shropshire, at the 16th-Century Benthall Hall; now a National Trust property.

Bateman was a founder of the Society of Painters in Tempera in 1901.

Bateman was also noted as a naturalist (corresponding with Charles Darwin), a botanical illustrator, sculptor, book illustrator, and an Italian scholar. He also left a horticultural legacy, in his planting of the gardens at Bentham Hall from 1890–1906 — much of his garden design there is still extant and is now maintained by the National Trust as part of Benthall Hall.

A new book by Nigel Daly is now out about Robert’s life.

“When the author bought a falling down fortified house on the Staffordshire moorlands, he had no reason to anticipate the astonishing tale that would unfold as it was restored. An increasingly mysterious, set of relationships emerged amongst its former owners, revolving round a now almost forgotten artist. Robert Bateman, in his youth was a prominent Pre-Raphaelite and friend of Burne Jones. The son of a local millionaire, he was to marry the granddaughter of the Earl of Carlisle, and to be associated with both Disraeli and Gladstone, and other prominent political and artistic figures. But he had abandoned his life as a public artist in mid-career for no obvious reason, to live as a recluse, while his father lost his money, and his rich and glamorous wife-to-be had married the local vicar, already in his sixties and shortly to die. The discovery of two paintings by Bateman, both clearly autobiographical, led to an utterly absorbing forensic investigation into Bateman's life. The story moves from Staffordshire to Lahore in India, to Canada, to Wyoming, and then, via Buffalo Bill to Peru and back to England. It leads to the improbable respectability of the Wills (now Imperial Tobacco) cigarette business in Bristol, and then, less respectably, to a car park in Stoke on Trent. En route the author pieces together, and illustrates, an astonishing and deeply moving story of love and loss, of art and politics, of morality and hypocrisy, of family secrets, concealed but never quite completely obscured. The result is a page-turning combination of detective story and tale of human frailty, endeavour and love. It is also a portrait of a significant artist, a reassessment of whose work is long overdue”