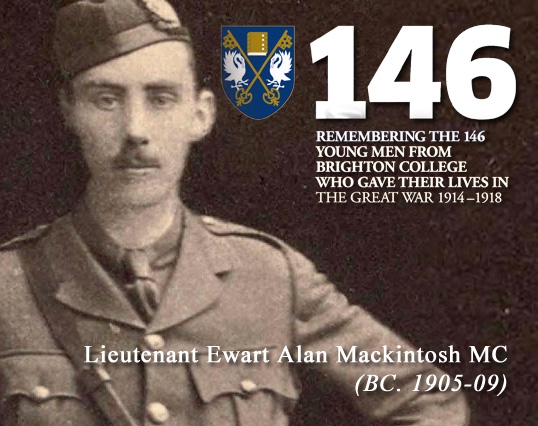 Ewart Alan Mackintosh (4 March 1893 – 23 November 1917) was a war poet and an officer in the Seaforth Highlanders from December 1914. Mackintosh was killed whilst observing the second day of the second Battle of Cambrai, 21 November 1917. His best poetry has been said to be comparable in quality to that of Rupert Brooke.

Ewart Alan Mackintosh was born on 4 March 1893, the only son of Alexander Mackintosh and his wife. Although he was born in Brighton in Sussex, his father's roots were from Alness in Ross and Cromarty. His maternal grandfather was the preacher James Guinness Rogers. He said that it was because of his grandfather's friendship with British Prime Minister, William Ewart Gladstone, that he was given his first name.

He studied locally at Brighton College whilst also studying Gaelic and learning to play the pipes during the holidays. He continued his studies at St Paul's school in London and then studied classics at Christ Church, Oxford. Mackintosh, who was a member of the University of Oxford Officers' Training Corps, tried to join the army immediately war broke out in August and while still in his university course. He was rejected on the grounds of his poor eyesight. He reapplied and was accepted by the Seaforth Highlanders, and was commissioned as a second lieutenant on 31 December 1914. He served with the 5th (The Sutherland and Caithness Highland) Battalion, Seaforth Highlanders (a Territorial Force unit), which was part of 51st (Highland) Division.

Mackintosh was killed in action on the second day of the Battle of Cambrai, 21 November 1917, whilst with the 4th Seaforth Highlanders. He was there observing the heavy action near the village of Cantaing. Cambrai was noteworthy in using new tactics including the first mass use of tanks. He was buried in the Orival Wood Cemetery near Flesquières in northern France.

His poetry has been said to have been as good as the more famous war poet Rupert Brooke. Lines from his poem "A Creed" are used on "The Call"; the Scottish American war memorial in Edinburgh's Princes Street Gardens when it was installed in 1927. The memorial was paid for by Scottish Americans to commemorate the bravery of the Scottish soldiers of the Great War.

A small ceremony took place in France on the 90th anniversary of Mackintosh's death and there were plans to dedicate a chapel to him and his regiment.